White Borders: The History of Race and Immigration in the United States from Chinese Exclusion to the Border Wall (Hardcover) 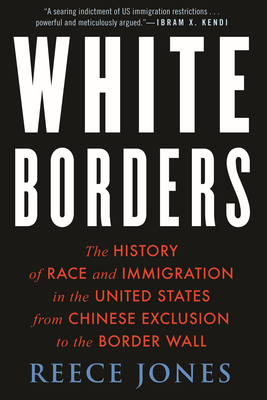 White Borders: The History of Race and Immigration in the United States from Chinese Exclusion to the Border Wall (Hardcover)


Not On Our Shelves—Ships in 1-5 Days
“This powerful and meticulously argued book reveals that immigration crackdowns … [have] always been about saving and protecting the racist idea of a white America.”
—Ibram X. Kendi, award-winning author of Four Hundred Souls and Stamped from the Beginning

“A damning inquiry into the history of the border as a place where race is created and racism honed into a razor-sharp ideology.”
—Greg Grandin, Pulitzer Prize–winning author of The End of the Myth

Recent racist anti-immigration policies, from the border wall to the Muslim ban, have left many Americans wondering: How did we get here? In what readers call a “chilling and revelatory” account, Reece Jones reveals the painful answer: although the US is often mythologized as a nation of immigrants, it has a long history of immigration restrictions that are rooted in the racist fear of the “great replacement” of whites with non-white newcomers. After the arrival of the first slave ship in 1619, the colonies that became the United States were based on the dual foundation of open immigration for whites from Northern Europe and the racial exclusion of slaves from Africa, Native Americans, and, eventually, immigrants from other parts of the world.

Jones’s scholarship shines through his extensive research of the United States’ racist and xenophobic underbelly. He connects past and present to uncover the link between the Chinese Exclusion laws of the 1880s, the “Keep America American” nativism of the 1920s, and the “Build the Wall” chants initiated by former president Donald Trump in 2016. Along the way, we meet a bizarre cast of anti-immigration characters, such as John Tanton, Cordelia Scaife May, and Stephen Miller, who pushed fringe ideas about “white genocide” and “race suicide” into mainstream political discourse. Through gripping stories and in-depth analysis of major immigration cases, Jones explores the connections between anti-immigration hate groups and the Republican Party. What is laid bare after his examination is not just the intersection between white supremacy and anti-immigration bias but also the lasting impacts this perfect storm of hatred has had on United States law.
Reece Jones is a 2021 Guggenheim Fellow and a professor in and the chair of the Department of Geography and Environment at the University of Hawai‘i. He has researched immigration for over 20 years and is the author of Border Walls and Violent Borders, over 2 dozen journal articles, and 4 edited books. He is editor in chief of the journal Geopolitics and lives in Honolulu with his family. Connect with him on Twitter at @ReeceJonesUH.
“A highly recommended, in-depth history of migration that accounts for the lives affected by American border policing and immigration restrictions.”
—Library Journal, Starred Review

“The author’s ability to connect the dots is impressive—and depressing, since the politics of ethnic hatred persist.”
—Kirkus Reviews

“Reece Jones explores the tragic, ludicrous, and endlessly violent creation and maintenance of America’s borders . . . Jones’s greatest contribution is to show the forces that really drove the Trump campaign.”
—Chicago Review of Books

“White Borders is a searing indictment of the US immigration restrictions from Chinese Exclusion through the Trump presidency. This powerful and meticulously argued book reveals that while immigration crackdowns are justified as protecting jobs and workers, they’ve always been about saving and protecting the racist idea of a white America.”
—Ibram X. Kendi, National Book Award–winning author of Stamped from the Beginning and How to Be an Antiracist

“With eloquent prose and masterful storytelling, Reece Jones narrates the hard history of immigration policies of the US settler colonial state that was founded and rooted in white supremacy, from Chinese exclusion to the border wall.”
—Roxanne Dunbar-Ortiz, author of An Indigenous Peoples’ History of the United States

“Reece Jones’s White Borders is a damning inquiry into the history of the border as a place where race is created and racism honed into a razor-sharp ideology. Deeply researched and movingly written, White Borders is an indispensable book.”
—Greg Grandin, Pulitzer Prize-winning author of The End of the Myth

“Reece Jones guides us through the long, tangled, and still developing history of how the United States came to know itself as a nation through the increasingly strict control of movement across its borders. Jones demonstrates in this assiduously researched and carefully crafted book that the nation’s borders are in fact central to making the state what it is: a key tool in the maintenance not just of white supremacy but of whiteness itself.”
—Brendan O’Connor, author of Blood Red Lines: How Nativism Fuels the Right