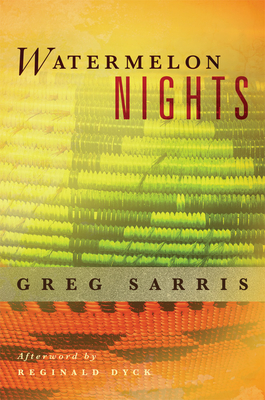 This is book number 73 in the American Indian Literature and Critical Studies series.

In Watermelon Nights, Greg Sarris tells a powerful tale about the love and forgiveness that keep a modern Native American family together in Santa Rosa, California. Told from the points of view of a twenty-year-old Pomo man named Johnny Severe, his grandmother Elba, and his mother, Iris, this intergenerational saga uncovers the secrets--and traumatic events--that inform each of these characters' extraordinary powers of perception. First published in 1998, Watermelon Nights remains one of the few works of fiction to illuminate the experiences of urban Native Americans and is the only one to depict the historical conditions that shape a tribe's rural-to-urban migration. As the novel opens, Johnny is trying to organize the remaining members of his displaced California tribe. At the same time, he is struggling with his own sexuality and thinking about leaving his grandmother's home for the big city. As the novel shifts perspective, tracing the controversial history of the Pomo people, we learn how the tragic events of Elba's childhood, as well as Iris's attempts to separate herself from her cultural roots, make Johnny's dilemma all the more difficult. In the end, what binds both family and tribe together is a respect--albeit at times reluctant--for the traditions that have withstood so many challenges. This new edition of the novel features a revised preface by the author and an afterword by Reginald Dyck, who identifies broader contexts important to our understanding of the novel, including tribal sovereignty, federal Indian policy, and the effects of historical trauma. Gritty yet rich in emotion, Watermelon Nights stands beside the works of Louise Erdrich, Stephen Graham Jones, and Tommy Orange.