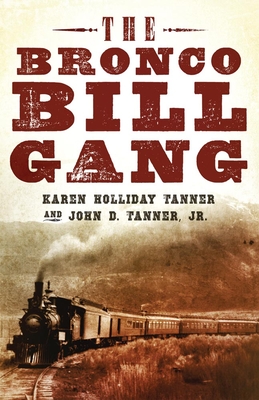 
Not On Our Shelves—Ships in 1-5 Days
The short, bloody career of "Bronco Bill" Walters and his gang captures the devil-may-care violence of the Wild West. In this detailed narrative of the gang's crime spree in territorial New Mexico and Arizona, two experts in outlaw history offer a gunshot-by-gunshot account of how some especially dangerous outlaws plied their trade in 1898.

William Walters reached New Mexico Territory from Texas in the late 1880s and quickly gained a reputation for his ability to sit a horse and for his violent ways. The Bronco Bill Gang skillfully dissects his propensity for trouble and shows how he soon found himself in the territorial penitentiary. In the spring of 1898, after a sojourn stealing horses in Arizona, Walters and four apprentice outlaws turned to armed robbery, holding up passenger trains on the Santa Fe Railroad in Grants and Bel n, New Mexico. By the time a Wells Fargo posse captured Bronco Bill, two of the outlaws, two deputies, and a Navajo tracker had been killed in gunfights.

Anyone with a taste for western history or an interest in New Mexico and Arizona in the bad old days will find this book irresistible. The authors' attention to the ways Bill and his men fell into a life of crime shows us the real West, where cowboys and gunmen could wind up on either side of the law. The Bronco Bill Gang is the first book to explore this fabled band of outlaws who crisscrossed the American Southwest.