The Children's Jewish Holiday Kitchen: A Cookbook with 70 Fun Recipes for You and Your Kids, from the Author of Jewish Cooking in America (Paperback) 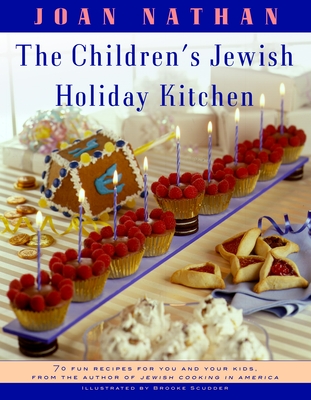 The Children's Jewish Holiday Kitchen: A Cookbook with 70 Fun Recipes for You and Your Kids, from the Author of Jewish Cooking in America (Paperback)


Not On Our Shelves—Ships in 1-5 Days
In The Children’s Jewish Holiday Kitchen, beloved authority on Jewish cooking Joan Nathan shares seventy child-friendly recipes and cooking activities from around the world. Covering the ten major holidays, here she present a vast array of foods, flavors, and ideas. Included are dishes old and new, traditional and novel—everything from hamantashen to hummus, chicken soup with matzah balls to matzah pizza, fruit kugel to Persian pomegranate punch. Beautifully illustrated, this delightful cookbook will draw the entire family into the spirit and fun of Jewish holiday celebrations.
Joan Nathan is the author of numerous cookbooks, including Jewish Cooking in America and The New American Cooking, both of which won the James Beard Award and the IACP Award for best cookbook of the year. She was the host of the nation­ally syndicated PBS television series Jewish Cooking in America with Joan Nathan, based on the book. A frequent contributor to The New York Times, Tablet magazine, and other publications, Nathan is the recipient of numerous awards, including James Beard’s Who’s Who of Food and Beverage in America, Les Dames d’Escoffier’s Grande Dame Award, and Food Arts magazine’s Silver Spoon Award, and she received an honorary doctorate from the Spertus Institute of Jewish Culture in Chicago. The mother of three grown children, Nathan lives in Washington, D.C., and on Martha’s Vineyard with her hus­band, Allan Gerson.
"A book families will use year round. The food and the lessons will be remembered for a lifetime.'" —USA Today

"Full of wonderful activities and recipes that will add new memories to your family's celebrations." —Bon Appétit