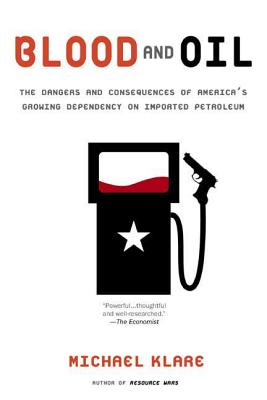 In his pathbreaking Resource Wars, world security expert Michael Klare alerted us to the role of resources in conflicts in the post-cold-war world. Now, in Blood and Oil, he concentrates on a single precious commodity, petroleum, while issuing a warning to the United States—its most powerful, and most dependent, global consumer.

Since September 11 and the commencement of the "war on terror," the world's attention has been focused on the relationship between U.S. foreign policy in the Middle East and the oceans of crude oil that lie beneath the region's soil. Klare traces oil's impact on international affairs since World War II, revealing its influence on the Truman, Eisenhower, Nixon, and Carter doctrines. He shows how America's own wells are drying up as our demand increases; by 2010 the United States will need to import 60 percent of its oil. And since most of this supply will have to come from chronically unstable, often violently anti-American zones—the Persian Gulf, the Caspian Sea, Latin America, and Africa—our dependency is bound to lead to recurrent military involvement.

With clarity and urgency, Blood and Oil delineates the United States' predicament and cautions that it is time to change our energy policies, before we spend the next decades paying for oil with blood.

Michael T. Klare is the author of more than fifteen books, including Resource Wars and Rising Powers, Shrinking Planet. A contributor to Current History, Foreign Affairs, and the Los Angeles Times, he is the defense correspondent for The Nation and the director of the Five College Program in Peace and World Security Studies at Hampshire College in Amherst, Massachusetts.

“A thoughtful and well-researched history of oil and geopolitics . . . Mr. Klare provides a service when he puts America's close ties with Saudi Arabia in a historical context.” —The Economist

“A steady poli-sci elaboration of U.S. foreign policy of the past 60 years as viewed through the lens of oil . . . [Blood and Oil] is elaborately sourced [and] dismayingly convincing.” —Lisa Margonelli, San Francisco Chronicle

“Michael Klare's Blood and Oil is the best book among the recent outpouring of studies on oil and world affairs. I am using it in three classes this semester. Indeed, it is a model of how to research and write contemporary history. Carefully researched, convincingly argued, and clearly written, it shows how oil's role in American society and politics influences U.S. relations with the rest of the world. Blood and Oil is essential reading for anyone concerned about the sources and dynamics of U.S. foreign policy.” —David Painter, Walsh School of Foreign Service, Georgetown University

“Donald Rumsfeld famously declared that the Iraq War 'has nothing to do with oil, literally nothing to do with oil.' Nonsense, demonstrates Michael Klare, in Blood and Oil, a compelling new assessment of America's bet on Middle Eastern oil as the lifeblood of the U.S. economy. Klare's mastery of the interplay of natural resources and conflict is unrivaled, and his new study is timely and vitally important.” —Jeffrey D. Sachs, Director of the Earth Institute at Columbia University

“Blood and Oil throws into sharp relief the political and social dimensions of the most important problem of our times. Reasoned and readable, it sketches out the terrible consequences of our nation's immense and growing addiction to petroleum. This is an important book.” —David Goodstein, author of Out of Gas

“You don't have to be a conspiracy theorist or a Michael Moore enthusiast to think that Donald Rumsfeld and his colleagues in the Bush administration are being disingenuous when they declare that the war in Iraq is not about oil . . . Klare, a professor of peace and world-security studies at Hampshire College and defense correspondent for The Nation, suggests that the United States has never resolved the inherent tension between our need for assured supplies of petroleum to keep the economy cooking and our growing reliance on overseas sources of that oil, especially from areas, like the Persian Gulf, that have a long and continuing history of instability . . . But the questions [raised in this book] transcend approval or disapproval of any one administration, and go to the core of whether any country can--purposefully and without vast disruptions--make the transition from an economy dependent on one finite resource to an economy based on renewable, nonpolluting resources . . . [Klare notes that] such a transition would be difficult in the best of times, and that these are not the best of times . . . Klare [also argues that] the Bush administration's war on terrorism, the impulse of its neoconservative supporters to spread 'democracy' to the Middle East, and our desperate need for stable supplies of oil have merged into a single strategy--one that will commit us to maintaining military forces in many parts of the world and to using those forces to protect oil fields and supply routes. 'It is getting hard,' he writes, 'to distinguish U.S. military operations designed to fight terrorism from those designed to protect energy assets' . . . We are headed into uncharted territory, led by a government that seems prepared to use force, when necessary, to preserve the current system. We face growing competition from other countries for a finite resource at a time of growing animosity toward the United States.” —Malcolm G. Scully, The Chronicle of Higher Education

“The rapid increase in the price of gasoline is a direct result of the failure of the U.S. to develop a realistic energy policy. As Michael Klare demonstrates in this provocative new book, we will continue to pay high prices and use military force unless we reduce our dependence on oil from the Middle East. A must read for Americans concerned about national security and economic growth.” —Lawrence Korb, Senior Fellow at the Center for American Progress and former Assistant Secretary of Defense

“Incisive and accurate . . . From our gluttonous demand for fuel to power our automobiles to the activities of Centcom in the Persian Gulf, Blood and Oil is the most comprehensive, up-to-date analysis of America's military-petroleum complex.” —Chalmers Johnson, author of The Sorrows of Empire

“Oil, says Michael Klare, makes us strong, but dependency makes us weak. His clear, informed, and troubling diagnosis of America's greatest addiction comes as oil's rising cost in blood and treasure requires us to understand the greater perils to come. Blood and Oil proves that oil's substitutes--and especially their efficient use--are an even greater bargain than they look. Too much time has already been wasted on denial. America's security, power, and freedom now turn on our choice.” —Amory B. Lovins, Cofounder and CEO, Rocky Mountain Institute

“Compelling and insightful . . . U.S. dependence on oil is not something that can be dealt with 'down the road,' Klare posits. He offers thoughtful solutions that, while expensive, are essential to escape compromising the principles of American policy. This powerful book forecasts that if we do not change the paradigm, the flow of blood will continue unabated while a dwindling supply of oil will threaten powerful and weak nations alike.” —H. C. Stackpole, Lieutenant General, USMC (ret.)

“The world's rapidly growing economy is dependent on oil, the supply is running out and the U.S. and other great powers are engaged in an escalating game of brinkmanship to secure its continued free flow. Such is the premise of Klare's powerful and brilliant new book (following Resource Wars). The U.S.--with less than 5% of the world's total population--consumes about 25% of the world's total supply of oil, he argues. With no meaningful conservation being attempted, Klare sees the nation's energy behavior dominated by four key trends: 'an increasing need for imported oil; a pronounced shift toward unstable and unfriendly suppliers in dangerous parts of the world; a greater risk of anti-American or civil violence; and increased competition for what will likely be a diminishing supply pool.' In clear, lucid prose, Klare lays out a disheartening and damning indictment of U.S. foreign policy. From the waning days of WWII, when Franklin Roosevelt gave legitimacy to the autocratic Saudi royalty, to the current conflict in Iraq, Klare painstakingly describes a nation controlled by its unquenchable thirst for oil. Rather than setting out a strategy for energy independence, he finds a roadmap for further U.S. dependence on imported oil, more exposure for the U.S. military overseas and, as a result, less safety for Americans at home and abroad. While Klare offers some positive suggestions for solving the problem, in tone and detail this work sounds a dire warning about the future of the world.” —Publishers Weekly (starred review)