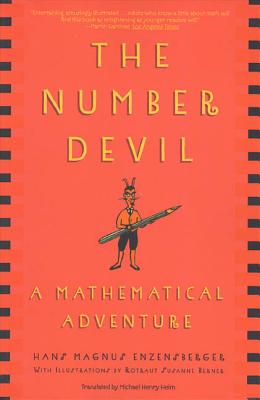 The international best-seller that makes mathematics a thrilling exploration

In twelve dreams, Robert, a boy who hates math, meets a Number Devil, who leads him to discover the amazing world of numbers: infinite numbers, prime numbers, Fibonacci numbers, numbers that magically appear in triangles, and numbers that expand without end. As we dream with him, we are taken further and further into mathematical theory, where ideas eventually take flight, until everyone—from those who fumble over fractions to those who solve complex equations in their heads—winds up marveling at what numbers can do.

Hans Magnus Enzensberger is a true polymath, the kind of superb intellectual who loves thinking and marshals all of his charm and wit to share his passions with the world. In The Number Devil, he brings together the surreal logic of Alice in Wonderland and the existential geometry of Flatland with the kind of math everyone would love, if only they had a number devil to teach them.

Hans Magnus Enzensberger is the author of many highly lauded books, including Civil Wars: From L.A. to Bosnia and The Number Devil: A Mathematical Adventure. He lives in Munich.

Rotraut Susanne Berner is an illustrator who lives in Heidelberg.

Michael Henry Heim is a prize-winning translator who teaches at UCLA.

“Entertaining, amusingly illustrated . . . Adults who know a little about math will find this book as enlightening as younger readers will.” —Martin Gardner, Los Angeles Times

"Charming and seductive . . . We all might learn more if we each had an Enzensbergian devil to beguile us into a dream and to give us a glimpse of the beauty and power of mathematics." —John Allen Paulos, The New York Review of Books

"Interesting and fun at the same time." —The Guardian