The Anatomy of Human Destructiveness (Paperback) 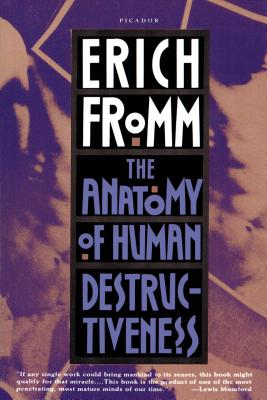 The Anatomy of Human Destructiveness (Paperback)

Renowned psychoanalyst and social philosopher Erich Fromm examines the causes and effects of people’s violent tendencies in The Anatomy of Human Destructiveness.

In this provocative book, the distinguished author writes to break the deadlock argued about the roots of human nature by exploring the struggle between the instinctivism of Konrad Lorenz and behavior psychologist B. F. Skinner: are people inherently antagonistic or do people learn hostility from their environment and the actions of those around them?

Drawing from neurophysiology and anthropology studies and findings, Fromm presents fascinating ideas about how the human character and condition developed—and continues to develop—in contemporary society.

“A book by Erich Fromm is always intelligent and contains much of interest and insight, and this one is no exception.”—The New York Times

Erich Fromm was a German-born American psychoanalyst and social philosopher who explored the interaction between psychology and society. His works include The Art of Loving, Escape from Freedom, and The Sane Society. He died in 1980.

“If any single work could bring mankind to its senses, this book might qualify for that miracle. . . . This book is the product of one of the most penetrating, most mature minds of our time.” —Lewis Mumford

“In this perhaps most important of his pioneering theoretical works, the distinguished author writes with brilliant insight in attempting to break the deadlock in the struggle between the instinctivism of Konrad Lorenz . . . and behaviorist B.F. Skinner. He moves toward a provocative conclusion which involves a critical revision of Freud's theory of a "death instinct" in man. . . . Fromm's studies of Stalin and Himmler, and especially his penetrating psychobiography of Hitler, fascinatingy support his thesis.” —Publisher's Weekly

“Rich and provocative . . . a major book from the pen of a major writer.” —The Washington Post Book World

“Fromm is an original thinker. . . . His analysis of the causes of destructiveness is unique, and he has an enviable skill in the lucid presentation of intricate material.” —Atlantic Monthly

“By far the best book I have ever read on the subject and by far the most absorbing.” —Ashley Montagu