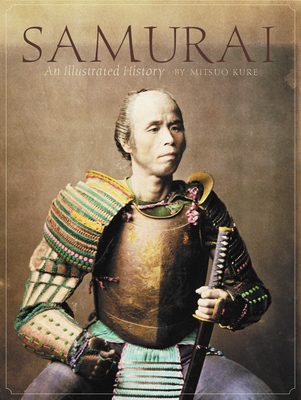 
Backordered
Samurai: An Illustrated History brings the violent, tumultuous, and, at the same time, elegant world of the medieval Japanese samurai to life. This Japanese history book traces the story of a unique historical phenomenon: a period of 700 years--equivalent to the entire stretch of Western history between the reigns of the Crusader king Richard the Lionhearted and of Queen Victoria at the height of the British Empire--during which an enclosed civilization was dominated by a single warrior caste. The historical narrative of samurai history is supported by explanations of samurai armor, weapons, fortifications, tactics, and customs, and illustrated with nearly 800 fascinating color photographs, maps, and sketches, including ancient scroll paintings and surviving suits of armor preserved for centuries in Japanese shrines. From the 12th to the 19th centuries the history of Japan was mainly the history of the samurai--the class of professional fighting men. At first, they were no more than lowly soldiery employed by the court aristocracy of Kyoto, but the growing power of the provincial warrior clans soon enabled them to brush aside the executive power of the imperial court and to form a parallel military government. Though individual dynasties came and went in cycles of vigor and decadence, the dominance of the samurai as a class proved uniquely resilient.
Mitsuo Kure graduated from medical school in 1972 and became a surgeon based in Tokyo. His lifelong interest in samurai began at an early age when he began constructing historically accurate models of samurai figures. Later, with the assistance on Togo Ryu, a well-known Japanese historical novelist, he began to reconstruct full-size samurai armor and started what is now one of the premier re-enactment groups in Japan. His group is currently one of the leading organizers of samurai battle re-enactments in Japan.