Find a Way: The Inspiring Story of One Woman's Pursuit of a Lifelong Dream (Paperback) 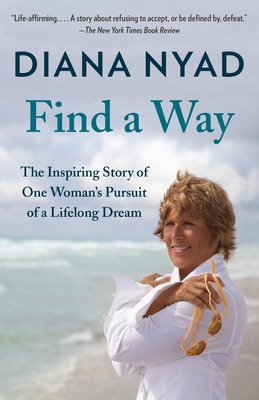 Find a Way: The Inspiring Story of One Woman's Pursuit of a Lifelong Dream (Paperback)

Hillary Clinton said that Find a Way would stay with her through the general election:  “When you’re facing big challenges in your life, you can think about Diana Nyad getting attacked by the lethal sting of box jellyfishes. And nearly anything else seems doable in comparison.”

When Diana Nyad arrived on the shore of Key West after fifty-three hours of grueling swimming across an epic ocean, she not only set a world record—becoming the first person to swim the shark-infested waters between Cuba and Florida with no cage for protection—she also succeeded in fulfilling a dream she first chased at age twenty-eight and at long last achieved when she was sixty-four.

Now, in a riveting memoir, Diana shares a spirited account of what it takes to face one’s fears, engage one’s passions, and never ever give up. For no matter what life may throw at you, or how many times you may have experienced defeat, it is always possible—as long as you commit to living life to the nth degree, no regrets—to “find a way."

For her maverick open-water performance of the 1970s, Diana Nyad was known as the world’s greatest long-distance swimmer. For the next thirty years, Nyad was a prominent sports broadcaster and journalist, filing compelling stories for National Public Radio, ABC’s Wide World of Sports, and others. She is a national fitness icon, has written three other books, is a talented linguist, and is one of today’s most powerful and engaging public speakers.

“Life-affirming. . . . A story about refusing to accept, or be defined by, defeat.” —The New York Times Book Review

“An inspiration.” —The Wall Street Journal

“Outstanding. . . . A masterful memoir and powerful demonstration of what’s possible when you don’t give up your dream.” —The Christian Science Monitor

“What makes Nyad’s story so remarkable, beyond the harrowing trials she faced at sea—unpredictable currents and weather, deadly sea animals—is the strength of a resolve that would not admit defeat and knew no boundaries. ‘Whatever your Other Shore is,’ she writes, ‘whatever you must do . . . you will find a way.’ Inspiring reading for anyone who has ever dared to dream the impossible.” —Kirkus Reviews

“Fascinating. . . . Nyad’s writing is clear and direct, with her grit and determination finally finding a way.” —The Seattle Times

“Astonishing. . . . Her message to readers is that anyone who has a dream and perseveres can also be successful.” —Houston Chronicle

“Nyad fiercely owns this story. . . . [She] also envelops those friends, family, and colleagues who helped her along the way, and any readers who would take heart from it.” —Booklist (starred review)

“A fascinating glimpse into her life as a talented and fiercely determined athlete. . . . [A] moving account.” —Library Journal
For This Book...
Video