Boys Among Men: How the Prep-to-Pro Generation Redefined the NBA and Sparked a Basketball Revolution (Hardcover) 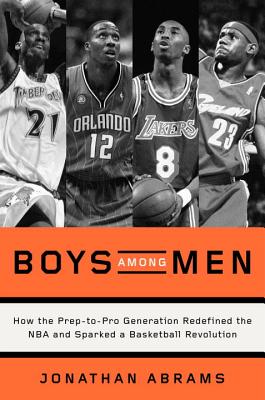 Boys Among Men: How the Prep-to-Pro Generation Redefined the NBA and Sparked a Basketball Revolution (Hardcover)


Special Order—Subject to Availability
The definitive, never-before-told story of the prep-to-pro generation, those basketball prodigies who from 1995 to 2005 made the jump directly from high school to the NBA.

When Kevin Garnett shocked the world by announcing that he would not be attending college—as young basketball prodigies were expected to do—but instead enter the 1995 NBA draft directly from high school, he blazed a trail for a generation of teenage basketball players to head straight for the pros. That trend would continue until the NBA instituted an age limit in 2005, requiring all players to attend college or another developmental program for at least one year.

Over that decade-plus period, the list of players who made that difficult leap includes some of the most celebrated players of the modern era—Garnett, Kobe Bryant, LeBron James, Dwight Howard, Tracy McGrady, and numerous other stars. It also includes notable “busts” who either physically or mentally proved unable to handle the transition. But for better or for worse, the face of the NBA was forever changed by the prep-to-pro generation.

In compelling, masterfully crafted prose, Boys Among Men goes behind the scenes and draws on hundreds of firsthand interviews to paint insightful and engaging portraits of the most pivotal figures and events during this time. Award-winning basketball writer Jonathan Abrams has obtained remarkable access to the key players, coaches, and other movers and shakers from that time, and the result is a book packed with rare insights and never-before-published details about this chapter in NBA history. Boys Among Men is a thrilling, informative, must-read for any basketball fan.
JONATHAN ABRAMS is an award-winning journalist who has covered the NBA for  ESPN’s Grantland, The New York Times and Los Angeles Times. Heis a graduate of the University of Southern California.
"“Mr. Abrams is such an excellent reporter and has been such a keen observer of the NBA over more than two decades that he makes an unerring tour guide. It’s a blast just to let him lead us through the tumultuous era between Mr. Jordan and Mr. James.” - The Wall Street Journal

“Riveting….an exhaustive work of research and reporting that reads with the propulsive energy of a magazine feature that makes you late for something important.” - Slate

“A must-read about the game, an incisive and exhaustively reported exploration of the price that young men pay for a chance to make it in the extraordinarily competitive world of pro hoops. Jonathan Abrams asks smart questions and has a gift for portraiture…an important contribution to the discussion about the way we consume sports in America.” - The Daily Beast

"Expertly weaves stories and anecdotes from these players to create a fascinating retrospective on the culture, success and the continuing impact of those players in the league..Abrams’ book does an excellent job telling stories of these players, unearthing details that add depth to even the most-known stars including aspects of Kobe’s legendary pre-draft workouts and the “luckiest” shot that accelerated LeBron’s star rising in high school. It is worth reading for every basketball fan as a piece of entertainment as well as for deeper insight into an era now past and the players who still shape our present and future." - The Sporting News

"Abrams weaves a compelling tale about a transformational era in the NBA that also speaks to the sometimes-desperate pursuit of sporting stardom." - Kirkus (Starred Review)

"This essential, well-researched book will appeal to readers interested in basketball’s business side as well as the factors that have helped shape the modern NBA." -
“In this excellent effort, Abrams, the gifted hoops writer late of Grantland, examines this controversial phenomenon from every angle. –Publishers Weekly


"A riveting read that cements Jonathan Abrams' reputation as one of the world's best basketball writers." – Bill Simmons, #1 New York Times Bestselling author of The Book of Basketball

“A fascinating and unsettling account of what happened to professional basketball when teenagers made their way into a man's game."—Malcolm Gladwell, #1 New York Times bestselling author of Outliers and David and Goliath

“Will stand as the definitive dissection of an oddly brief, perpetually influential period in the history of NBA labor relations."—Chuck Klosterman, New York Times bestselling author of I Wear the Black Hat and Sex, Drugs and Cocoa Puffs

“There was much I learned from this book, which covers not only the superstar “kids" like Bryant and Garnett, but also the compelling cautionary tales.” —Jack McCallum, New York Times bestselling author of Dream Team and Seven Seconds or Less

"Boys Among Men is as inside as an account can be of the paths of those players, both the famous and the forgotten. It's not merely a compelling book for any hoops fan, it's an important one."—David  Epstein, New York Times bestselling author of The Sports Gene

“An indispensable book for anyone who cares about basketball.” —George Dohrmann, Pulitzer Prize winning author of Play Their Hearts Out

“Jonathan Abrams has transcended one of the NBA's great business and moral debates to deftly tell the inside story of the prep-to-pros phenomenon…A marvelous book that will stand the test of time." –Adrian Wojnarowski, New York Times best-author of the selling The Miracle of St. Anthony

“Jonathan Abrams expertly captures this crucial era in basketball history. Yet what makes Boys Among Men so compelling isn’t the high school players who turned out to be future hall of famers, but the stories of all the tragic would-be heroes that basketball has long forgotten.’ —Dave McMenamin, NBA writer for ESPN
For This Book...
Staff Pick