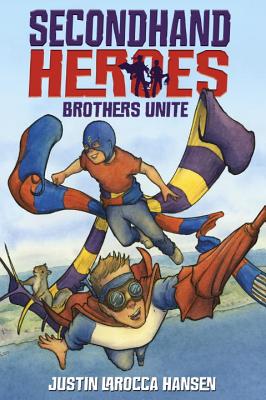 This is book number 1 in the Secondhand Heroes series.

Perfect for fans of Amulet, Sidekicks, and Zita the Spacegirl, this graphic novel series debut introduces Stretch and Brella, a pair of ordinary brothers whose extraordinary yard sale discovery turns them into superheroes

Tuck and Hudson are just two average suburban brothers—until their mother buys them a scarf and an umbrella at a yard sale. Quickly, the brothers realize that these ordinary-looking objects are full of magic, and that, with the help of their squirrel sidekick, they can use that magic to fight evil. As the boys move from fighting their neighborhood nemesis to facing bigger foes, they become Stretch and Brella, the unstoppable brother superhero duo. Soon, Stretch and Brella find themselves in another realm, where they take on enormous dragons and an evil knight in an incredible graphic novel adventure.
Justin LaRocca Hansen was raised in a small town in Massachusetts, spending his summers in Cape Cod. He has loved comics, drawing, and watercolor since he was very young, and his childhood adventures continue to inspire his storytelling today. After receiving his artistic and undergraduate training at the Ringling College of Art and Design in Florida, Justin began teaching in New York and Massachusetts. He is the author/illustrator of Monster Hunter and currently resides in Brooklyn, New York.
Praise for Secondhand Heroes #1: Brothers Unite

“Smart characterization . . . breathlessly paced adventure, and a dire cliff-hanger ending will make readers hope they don’t have to wait long for the sequel.”—Publishers Weekly

“The graphic novel is a clever story of two boys that feels a little like an American Harry Potter adventure, if Harry lived in the suburbs.”—Cleveland Plain Dealer