The Art of Football: The Early Game in the Golden Age of Illustration (Hardcover) 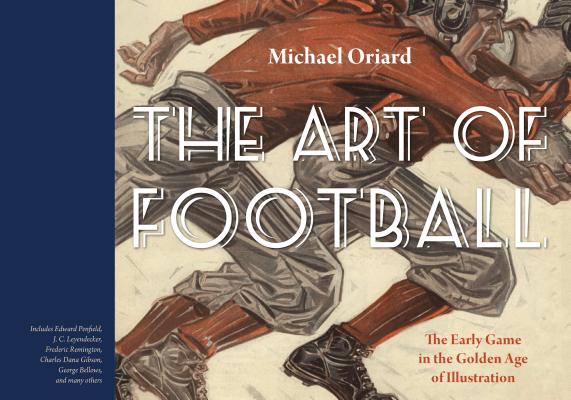 The Art of Football: The Early Game in the Golden Age of Illustration (Hardcover)

The Art of Football is a singular look at early college football art and illustrations. This collection contains more than two hundred images, many rare or previously unpublished, from a variety of sources, including artists Winslow Homer, Edward Penfield, J. C. Leyendecker, Frederic Remington, Charles Dana Gibson, George Bellows, and many others.

Along with the rich art that captured the essence of football during its early period, Michael Oriard provides a historical context for the images and for football during this period, showing that from the beginning it was perceived more as a test of courage and training in manliness than simply an athletic endeavor. Oriard’s analysis shows how these early artists had to work out for themselves—and for readers—what in the new game should be highlighted and how it should appear on the page or canvas. The Art of Football takes modern readers back to the day when players themselves were new to the sport, and illustrators had to show the public what the new game of football was. Oriard demonstrates how artists focused on football’s dual nature as a grueling sport to be played and as a social event and spectacle to be watched.

Through its illustrations and words The Art of Football gives readers an engaging look at the earliest depictions of the game and the origins of the United States as a football nation.

​Michael Oriard played football for the University of Notre Dame and the Kansas City Chiefs and is Distinguished Professor Emeritus in American literature and culture at Oregon State University. He is the author of four volumes on the cultural history of American football, including King Football: Sport and Spectacle in the Golden Age of Radio and Newsreels, Movies and Magazines, the Weekly, and the Daily Press. He has written about football for the New York Times, the Washington Post, and Sports Illustrated, and has appeared in numerous football documentaries produced by NFL Films, PBS’s Frontline, ESPN, and others.
"A gorgeous and thoughtful overview of the visual record of the early years of the game."—John Maxymuk, Library Journal starred review

"Michael Oriard returns to the themes of culture and media interpretations of football with this lavishly illustrated book that focuses on the early years of football art in the media."—Katie Taylor, Journal of Sport History

"This is a handsome and imaginative book that will satisfy both readers of football and observers of popular art, and it further cements Oriard's reputation as a most thoughtful and creative interpreter of American football."—Rich Loosbrock, Sport in American History

“A gem of a book that traces the sport’s aesthetic side all the way back to its emergence from the primordial ooze 150 years ago. . . . Where NFL Films and ESPN now stand, there were Homer, Bellows, and Remington. Leave it to a typically cerebral old offensive lineman to appreciate the difference.”—John Schulian, editor of Football: Great Writing about the National Sport


“The Art of Football takes us deep into the sport’s golden age. Michael Oriard brings us these marvelous images of the early sport, when the amateur game dominated and some of America’s greatest artists took up pen and brush to capture the rough play on the gridiron. Equally important, he presents and discusses dozens and dozens of wonderful images that make early football come alive. That’s the key word: this is lively history.”—Elliott J. Gorn, author of The Manly Art: Bare-Knuckle Prize Fighting in America