Baseball Beyond Our Borders: An International Pastime (Paperback) 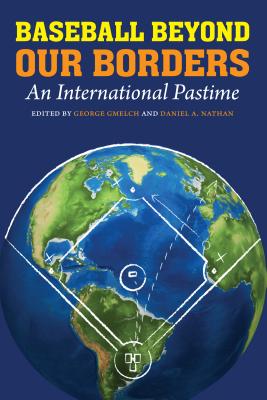 Baseball Beyond Our Borders: An International Pastime (Paperback)


Not On Our Shelves—Ships in 1-5 Days
Baseball Beyond Our Borders celebrates the globalization of the game while highlighting the different histories and cultures of the nations in which the sport is played.

This collection of essays tells the story of America’s national pastime as it has spread across the world and undergone instructive, entertaining, and sometimes quirky changes in the process. Covering nineteen countries and a U.S. territory, the contributors show how each country imported baseball, how baseball took hold and developed, how it is organized, played, and followed, and what local and regional traits tell us about the sport’s place in each culture.

But what lies in store as baseball’s passport fills up with far-flung stamps? Will the international migration of players homogenize baseball? What role will the World Baseball Classic play? These are just a few of the questions the authors pose.
George Gmelch is a professor of anthropology at the University of San Francisco and Union College in upstate New York. He is the author or editor of thirteen books, including Playing with Tigers: A Minor League Chronicle of the Sixties (Nebraska, 2016). Daniel A. Nathan is a professor and chair of American studies at Skidmore College. He is the editor of Rooting for the Home Team: Sport, Community, and Identity and past president of the North American Society for Sport History.
"[Baseball Beyond Our Borders] is comprehensive and engaging while it expands the horizons of our views about the international popularity and character of America's historic pastime."—Joseph L. Price, AETHLON

"The editors have done a considerable service to the field of sport history by providing a collection that both can entertain and inform the general baseball fan and also spark ideas for further investigation by scholars."Craig A. Kaplowitz, Journal of Sport History

“It is curious and warming to see baseball as a national pastime of so many lands with such markedly different cultures. What a marvelously adaptive game, and what a splendid collection of essays!”—John Thorn, official historian of Major League Baseball


“A feast for both the baseball scholar and the avid fan. [It is] a genuine window into history and culture.”—Lee Lowenfish, author of Branch Rickey: Baseball's Ferocious Gentleman


“This fascinating book is a must-read for everyone interested in the international game.”—Robert K. Fitts, author of Banzai Babe Ruth

“A treasure trove of information.”—Trey Strecker, editor of NINE: A Journal of Baseball History and Culture