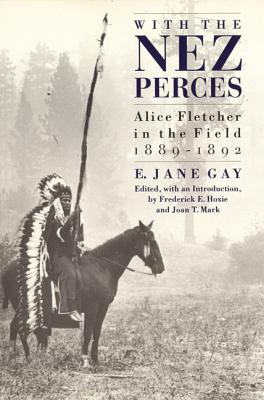 
Not On Our Shelves—Ships in 1-5 Days
In 1889 the U.S. government sent the anthropologist Alice Fletcher to Idaho to allot the Nez Perce Reservation. She was accompanied by E. Jane Gay, who served as cook, housekeeper, photographer, and general factotum. In this collection of her letters, Gay describes in sprightly fashion their encounters with feuding agents, hostile white squatters, and a Nez Perce tribe divided over and puzzled by this latest government program.
Frederick E. Hoxie is director of the D'Arcy McNickle Center for the History of the American Indian, Newberry Library. Joan T. Mark is the author of A Stranger in Her Native Land: Alice Fletcher and the American Indians, also a Bison Book.
"E. Jane Gay's letters are filled with humor and charming descriptions of her travels. . . . [A] fascinating and novel account."—American West

"Gay provides a remarkable and well-written account of Nez Perce culture under stress and of problems of land allocation. An informative documentation of an important era in Indian History."—Western Historical Quarterly

"Jane Gay's letters not only provide a rare first-hand account of the actual application of the Dawes Act. . .but offer insights into a phase of Nez Perce history neglected by historians. At the same time [they form] a tale of adventure which entertains as well as informs. The book also sheds light on women in the late nineteenth century by providing a record of the activities of two extraordinary individuals who ventured beyond their traditional role."—Arizona and the Wes