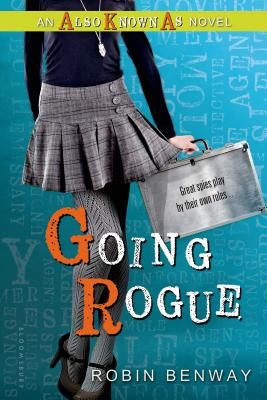 From Robin Benway, the National Book Award-winning author of Far from the Tree, comes a hilarious and romantic series about a normal girl . . . who just so happens to be a spy.

Being permanently based in a local New York City high school as an undercover operative has its moments, good and bad, for 16-year-old safecracker Maggie Silver. Pros: More quality time with her former mark-turned-boyfriend Jesse Oliver and insanely cool best friend, Roux. Getting to spend quality time with her semi-retired and international spy honorary uncle, Angelo. Cons: High school and the accompanying cliques, bad lunches, and frustratingly simple locker combinations.

But when Maggie's parents are falsely accused of stealing priceless gold coins, Maggie uses her safecracking skills to try and clear their names. Too bad it only serves to put her and everyone she loves in danger. Maggie and her "new team" flee to Paris where they must come up with a plan to defeat their former allies.

ROBIN BENWAY is the acclaimed author of National Book Award winner Far from the Tree, as well as Emmy & Oliver, Audrey, Wait!, and The Extraordinary Secrets of April, May & June. Her books have been published in 16 languages, won awards abroad, and been bestsellers in several countries. Formerly a bookseller and book publicist, she lives in Los Angeles.

"Good fun . . . and will resonate with readers." - Kirkus Reviews

"Fresh and fun." - starred review, Booklist on ALSO KNOWN AS

"The absolutely delightful cast of characters and snappy dialogue transform this book into a huge success." - School Library Journal on ALSO KNOWN AS

"From the first page to the last, this compassionate, funny, moving, compulsively readable novel about what makes a family gets it right." - starred review, Kirkus Reviews on FAR FROM THE TREE

"Equally heartwarming and heart-wrenching." - starred review, Publishers Weekly on FAR FROM THE TREE

"Benway’s intriguing premise and honest tone are a winning combination as she movingly portrays the growing trust between her characters." - starred review, Publishers Weekly on EMMY & OLIVER