A Woman's Life Is a Human Life: My Mother, Our Neighbor, and the Journey from Reproductive Rights to Reproductive Justice (Hardcover) 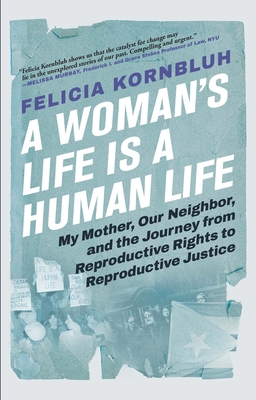 A Woman's Life Is a Human Life: My Mother, Our Neighbor, and the Journey from Reproductive Rights to Reproductive Justice (Hardcover)


On Our Shelves Now at:
Published to coincide with the fiftieth anniversary of Roe v. Wade, this urgent book
from historian Felicia Kornbluh reveals two movement victories in New York that forever changed the politics of reproductive rights nationallyBefore there was a "Jane Roe," the
most important champions of reproductive rights were ordinary people working in
their local communities. In A Woman's Life Is
a Human Life, historian Felicia Kornbluh
delivers the untold story of everyday activists who defined those rights and
achieved them, in the years immediately before and after Roe
v. Wade made abortion legal under federal
law.A Woman's Life Is a Human Life is
the story of two movements in New York that transformed the politics of
reproductive rights: the fight to decriminalize abortion and the fight against
sterilization abuse, which happened disproportionately in communities of color
and was central to an activism that was about the right to
bear children, as well as not to. Each initiative won key
victories that relied on people power and not on the federal courts. Their
histories cast new light on Roe and
constitutional rights, on the difficulty and importance of achieving a truly
inclusive feminism, and on reproductive politics today.This is a book full of drama. From
dissident Democrats who were the first to try reforming abortion laws and
members of a rising feminist movement who refashioned them, to the nation's largest
abortion referral service established by progressive Christian and Jewish
clergy, to Puerto Rican activists who demanded community accountability in
healthcare and introduced sterilization abuse to the movement's agenda, and
Black women who took the cause global, A Woman's Life
Is a Human Life documents the diverse ways activists
changed the law and worked to create a world that would support all people's
reproductive choices.The first in-depth study of a
winning campaign against a state's abortion law and the first to chronicle the
sterilization abuse fight side-by-side with the one for abortion rights, A
Woman's Life Is a Human Life is rich with firsthand
accounts and previously unseen sources--including
those from Kornbluh's mother, who wrote
the first draft of New York's law decriminalizing
abortion, and their across-the-hall neighbor,
Dr. Helen Rodr guez-Tr as, a Puerto Rican
doctor who cofounded the movement against
sterilization abuse. In this dynamic, surprising,
and highly readable history, Felicia Kornbluh
corrects the record to show how grassroots
action overcame the odds to create policy
change--and how it might work today.

Felicia Kornbluh is Professor of History at theUniversity of Vermont with a secondary appointment in Gender, Sexuality andWomen's studies, and an affiliated faculty member in Jewish Studies, at the Universityof Vermont. She is the author of The Battle for Welfare Rights: Politics andPoverty in Modern America and coauthor, with Gwendolyn Mink, of EnsuringPoverty: Welfare Reform in Feminist Perspective. She is a former boardmember of Planned Parenthood of Northern New England and current board vicepresident of the Planned Parenthood of Vermont Action Fund. Kornbluh lives inWilliston, VT, with her spouse and two black cats.