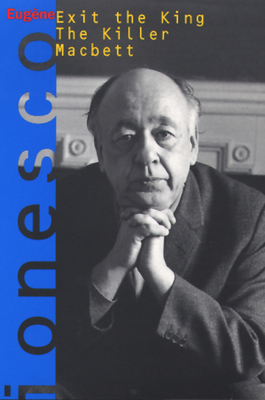 
Not On Our Shelves—Ships in 1-5 Days
Exit the King is a highly stylized, ritualized death rite unfolding the final hours of the once-great king Berenger the First. As he dies, his kingdom also dies. His armies suffer defeat, the young emigrate, the seasons change overnight, and his kingdom's borders shrink to the outline of his throne. At last, as the curtain falls, the king himself dissolves into a gray mist. The Killer is a study of pure evil. B renger, a conscientious citizen, finds himself in a radiantly beautiful city marred only by the presence of a killer. B renger's determination to find the murderer in the face of official indifference and his final defeat at the hands of an impersonal, pitiless cruelty speak with the universality of Kafka's The Trial. Macbett, inspired by Shakespeare's play, is "a grotesque joke . . . and] a very funny play. . . . Ionecso maliciously undermines sources and traditions, spoofing Shakespeare along with tragedy."--Mel Gussow, The New York Times.
Marowitz is a celebrated theatre director, critic, and playwright. Watson is a Fellow of the American Institute of Architects and professor emeritus of Rensselear Polytechnic Institute.