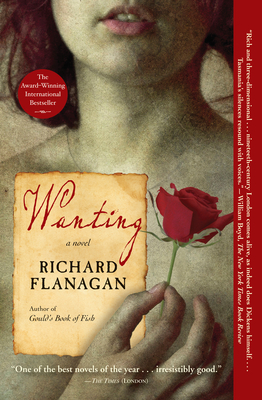 “Richard Flanagan has now written five great novels including the stunning, highly praised Gould's Book of Fish. His latest is a simple tale based in history, in which Flanagan takes three sensational events, well-known to Victorian England, and imagines how they were played out by the iconic characters involved: Sir John Franklin, governor of the penal colony of Van Diemen's Land and later a doomed Arctic explorer; Charles Dickens; and Mathinna, a beautiful, charismatic aboriginal child adopted by the Franklins in an infamous experiment. Wanting is about desire, and about lack, and the very real tragedy of colonization. How Flanagan brings these events and themes to life is genius.”
— Lisa Howorth, Square Books, Oxford, MS

Internationally acclaimed and profoundly moving, Richard Flanagan's Wanting is a stunning tale of colonialism, ambition, and the lusts and longings that make us human. Now in paperback, it links two icons of Western civilization through a legendarily disastrous arctic exploration, and one of the most infamous episodes in human history: the colonization of Tasmania.
In 1841, Sir John Franklin and his wife, Lady Jane, move to the remote penal colony of Van Diemen's Land, now Tasmania. There Lady Jane falls in love with a lively aboriginal girl, Mathinna, whom she adopts and makes the subject of a grand experiment in civilization--one that will determine whether science, Christianity, and reason can be imposed in the place of savagery, impulse, and desire.
A quarter of a century passes. Sir John Franklin disappears in the Arctic with his crew and two ships on an expedition to find the fabled Northwest Passage. England is horrified by reports of cannibalism filtering back from search parties, no one more so than the most celebrated novelist of the day, Charles Dickens. As Franklin's story becomes a means to plumb the frozen depths of his own life, Dickens finds a young actress thawing his heart.