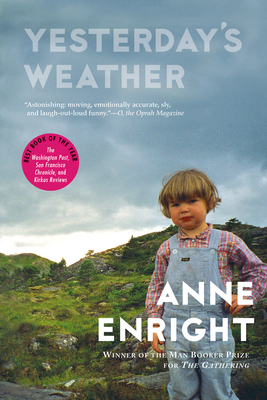 
Not On Our Shelves—Ships in 1-5 Days
Man Booker winner Anne Enright's story collection Yesterday's Weather is a series of moving glimpses into the lives of ordinary men and women struggling with the bonds of love, family, and community in an increasingly disconnected world. It exhibits the arresting images and subversive wit that mark Enright as one of the most thrillingly gifted writers of our time.
Yesterday's Weather shows us a rapidly changing Ireland, a land of family and tradition, but also, increasingly, of organic radicchio, cruise-ship vacations, and casual betrayals. An artisan farmer seethes at the patronage of a former Catholic-school classmate, now a successful restaurateur; a bride cuckolds her rich husband with an old college friend—a madman who refuses his pills, disappears for weeks on end, and plays the piano like a dream. Still more startling than loss or deception are the ways in which people respond: a wife raging at her husband's infidelity must weigh the real stakes after his affair takes a tragic turn; confronted with a similar situation, a woman decides to cheat with, rather than against, her man. Sharp, tender, never predictable, their sum is a vibrant tapestry of people struggling to find contentment with one another—and with themselves.