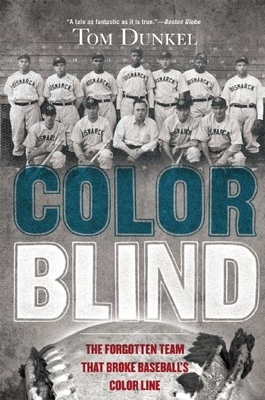 
Special Order—Subject to Availability
A 2013 CASEY Award Finalist for Best Baseball Book of the Year and a Booklist Top Ten Sports Book of the Year When baseball swept America in the years after the Civil War, independent, semipro, and municipal leagues sprouted up everywhere. With civic pride on the line, rivalries were fierce and teams often signed ringers to play alongside the town dentist, insurance salesman, and teen prodigy. In drought-stricken Bismarck, North Dakota during the Great Depression, one of the most improbable teams in the history of baseball was assembled by one of the sport's most unlikely champions. A decade before Jackie Robinson broke into the Major Leagues, car dealer Neil Churchill signed the best players he could find, regardless of race, and fielded an integrated squad that took on all comers in spectacular fashion. Color Blind immerses the reader in the wild and wonderful world of early independent baseball, with its tough competition and its novelty. Dunkel traces the rise of the Bismarck squad, focusing on the 1935 season and the first National Semipro Tournament. This is an entertaining, must-read for anyone interested in the history of baseball. "A tale as fantastic as it is true."--Boston Globe

Tom Dunkel is an award-winning freelance journalist who has written for The Washington Post, Sports Illustrated, The New York Times Sunday Magazine, The Wall Street Journal, and others.

"A delightful read. This is a tale worth telling."Washington Post

"Dunkel tells one of the great untold stories about baseball history, one that almost sounds too good to be true."Chicago Tribune

A terrific book. . . . It is funny, it is sad, it is spellbinding, required reading for anyone who loves baseball, who loves a vivid story well-told. . . . Color Blind is crammed with characters . . . laced with joy, rocked by sadness, framed by the civil rights struggle. . . . If you want to understand America, you have to understand baseball.”Philadelphia Daily News

"Dunkel writes with a passion and flair that matches the gritty, hardscrabble North Dakota landscape and culture of the Great Depression. His meticulous research and clever writing blows the dust off a forgottenbut importantchapter in baseball history. A fascinating addition to baseball’s library."Tampa Tribune

"A little-known but charming narrative that affirms baseball as a cornucopia of good stories."Daily Beast

Color Blind is an amazing story of black and white that should be read all over.”John Thorn, Official Historian, Major League Baseball and author of Baseball in the Garden of Eden

"[A] wonderful book. Color Blind captures Satch and his Negro League pals at their absolute rollicking best. What a fabulous addition to the literature of our national pastime!"Timothy M. Gay, author of Satch, Dizzy, and Rapid Robert: The Wild Saga of Interracial Baseball Before Jackie Robinson

"Dunkel delves into the history of players, towns, and baseball itself in constructing this portrait of a harmonious team rising above a segregated society. . . . a story that transcends championships, and an inspirational reflection on an otherwise dismal human rights history."Publishers Weekly

Dunkel well describes the loosey-goosey, not quite minor-league level of America’s regional teams in the 1920s and 30s, with ballplayers bouncing across the map to join one team and then another. . . . A happy story.”San Francisco Chronicle

Painstakingly researched. [here] is Paige in all his maddening glory . . . against a sepia backdrop of drought, dust storms, and swarms of grasshoppers at the depth of the Depression.”Washington Independent Review of Books