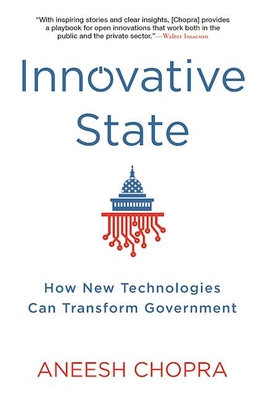 
Special Order—Subject to Availability
Over the last twenty years, our economy and our society have been completely revolutionized by technology. As Aneesh Chopra shows in Innovative State, once it became clear how much this would change America, a movement arose around the idea that these same technologies could reshape and improve government. But the idea languished, and while the private sector innovated, our government stalled. The election of Barack Obama offered a new opportunity. In 2009, Aneesh Chopra was named the first Chief Technology Officer of the United States. Previously the Secretary of Technology for Virginia and managing director for a health care think tank, Chopra led the administration's initiatives for a more open, tech-savvy government. In Innovative State, he draws on this experience and interviews with policy experts and tech insiders to offer an absorbing look at how government can establish a new paradigm for the internet era and allow us to tackle our most challenging problems, from economic development to veteran affairs.
Aneesh Chopra was the first chief technology officer of the United States government. Currently, he is the co-founder and executive vice president of Hunch Analytics, a technology firm focused on improving public and regulated sectors through data analytics, and a member of the Council on Virginia's Future. He is a graduate of Johns Hopkins and the Harvard Kennedy School of Government.