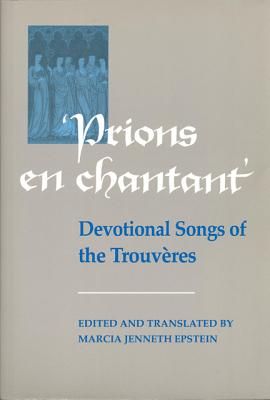 The rich medieval French tradition of vernacular devotional songs has not received much scrutiny. With 'Prions en chantant', Marcia Epstein aims to remedy that situation by offering an edition of largely anonymous trouv re devotional songs, designed for both scholars and performers, from two late-thirteenth-century manuscripts.

The majority of the music is published here for the first time. Sixty-one songs are presented, with forty-nine songs exhibited in Old French with a facing-page modern English translation followed by old musical notation and facing-page with modern musical transcription. An additional twelve songs, which lack music in the original sources, are represented by the Old French text and the modern English translation only. The introduction extensively describes the social, musical, literary and theological aspects of the trouv re songs contained in the volume. This is a valuable and welcome addition to the study of medieval music.