Machiavelli's Children: Leaders and Their Legacies in Italy and Japan (Paperback) 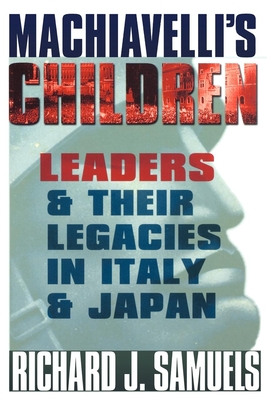 Machiavelli's Children: Leaders and Their Legacies in Italy and Japan (Paperback)

Two late-developing nations, Japan and Italy, similarly obsessed with achieving modernity and with joining the ranks of the great powers, have traveled parallel courses with very different national identities. In this audacious book about leadership and historical choices, Richard J. Samuels emphasizes the role of human ingenuity in political change. He draws on interviews and archival research in a fascinating series of paired biographies of political and business leaders from Italy and Japan. Beginning with the founding of modern nation-states after the Meiji Restoration and the Risorgimento, Samuels traces the developmental dynamic in both countries through the failure of early liberalism, the coming of fascism, imperial adventures, defeat in wartime, and reconstruction as American allies. Highlights of Machiavelli's Children include new accounts of the making of postwar Japanese politics--using American money and Manchukuo connections--and of the collapse of Italian political parties in the Clean Hands (Mani Pulite) scandal.The author also tells the more recent stories of Umberto Bossi's regional experiment, the Lega Nord, the different choices made by Italian and Japanese communist party leaders after the collapse of the USSR, and the leadership of Silvio Berlusconi and Ishihara Shintar on the contemporary right in each country.

Samuels is Ford International Professor and Head of the Department of Political Science at the Massachusetts Institute of Technology and Director of the MIT-Japan Program. He is also the author of Rich Nation, Strong Army and The Business of the Japanese State: Energy Markets in Comparative and Historical Perspective, both from Cornell, and winner of the Masayoshi Ohira Memorial Prize.