The Difference Satire Makes: Rhetoric and Reading from Jonson to Byron (Paperback) 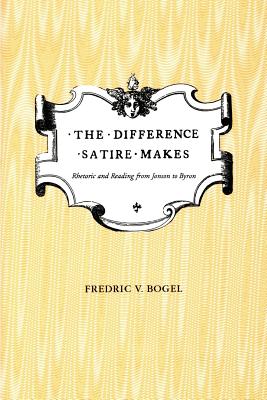 The Difference Satire Makes: Rhetoric and Reading from Jonson to Byron (Paperback)

Offering both the first major revision of satiric rhetoric in decades and a critical account of the modern history of satire criticism, Fredric V. Bogel maintains that the central structure of the satiric mode has been misunderstood. Devoting attention to Augustan satiric texts and other examples of satire--from writings by Ben Jonson and Lord Byron to recent performance art--Bogel finds a complicated interaction between identification and distance, intimacy and repudiation.Drawing on anthropological insights and the writings of Kenneth Burke, Bogel articulates a rigorous, richly developed theory of satire. While accepting the view that the mode is built on the tension between satirist and satiric object, he asserts that an equally crucial relationship between the two is that of intimacy and identification; satire does not merely register a difference and proceed to attack in light of that difference. Rather, it must establish or produce difference.The book provides fresh analyses of eighteenth-century texts by Jonathan Swift, John Gay, Alexander Pope, Henry Fielding, and others. Bogel believes that the obsessive play between identification and distance and the fascination with imitation, parody, and mimicry which mark eighteenth-century satire are part of a larger cultural phenomenon in the Augustan era--a questioning of the very status of the category and of categorical distinctness and opposition.

Fredric V. Bogel is Professor of English at Cornell University. He is the author of Literature and Insubstantiality in Later Eighteenth-Century England and The Dream of My Brother: An Essay on Johnson's Authority.