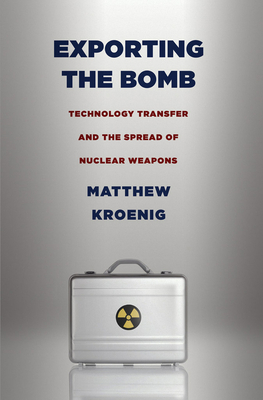 In a vitally important book for anyone interested in nuclear proliferation, defense strategy, or international security, Matthew Kroenig points out that nearly every country with a nuclear weapons arsenal received substantial help at some point from a more advanced nuclear state. Why do some countries help others to develop nuclear weapons? Many analysts assume that nuclear transfers are driven by economic considerations. States in dire economic need, they suggest, export sensitive nuclear materials and technology--and ignore the security risk--in a desperate search for hard currency.

Kroenig challenges this conventional wisdom. He finds that state decisions to provide sensitive nuclear assistance are the result of a coherent, strategic logic. The spread of nuclear weapons threatens powerful states more than it threatens weak states, and these differential effects of nuclear proliferation encourage countries to provide sensitive nuclear assistance under certain strategic conditions. Countries are more likely to export sensitive nuclear materials and technology when it would have the effect of constraining an enemy and less likely to do so when it would threaten themselves.

In Exporting the Bomb, Kroenig examines the most important historical cases, including France's nuclear assistance to Israel in the 1950s and 1960s; the Soviet Union's sensitive transfers to China from 1958 to 1960; China's nuclear aid to Pakistan in the 1980s; and Pakistan's recent technology transfers, with the help of rogue scientist A. Q. Khan, from 1987 to 2002. Understanding why states provide sensitive nuclear assistance not only adds to our knowledge of international politics but also aids in international efforts to control the spread of nuclear weapons.

Matthew Kroenig is Assistant Professor of Government at Georgetown University.