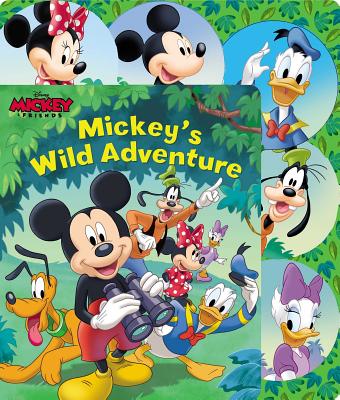 
Special Order—Subject to Availability
Slide the tabs and count with Mickey and his friends in this hands-on board book!

Mickey and his friends are on the hunt for the giant mythical Zootleslonk—covered in red feathers, walking on webbed feet, and with a fluffy tufted tail. But as they make their way through the wild, they get more than they bargained for! Slide the tabs and count with Mickey and his friends on this exciting animal adventure.
Maggie Fischer is originally from Oregon, but now lives in Seattle, Washington, after receiving her B.A. in English from Gonzaga University. The daughter of a children’s librarian, Maggie has grown up surrounded by books and feels impossibly lucky to write and edit books for kids. She spends her time trying not to get worried about the increasing number of crows in her backyard, petting her enormous cat, Finch, and drinking more coffee than is probably healthy.

Fernando Güell got his artistic talent from his mother, who was an illustrator. He studied at the art academy and became a freelance artist in 1977, doing illustration work for books, toys, and advertisements. He drew comics for the Danish Disney publisher Egmont from 1981 to 1986, using a variety of characters, such as Donald Duck, Hiawatha, Mickey Mouse, and Winnie the Pooh, initially through Bardon Art and later Selecciones. He has also worked at the art department of Disneyland Paris. In 2000, Güell became part-time art director at Egmont, while also illustrating stories and gags with movie characters like "Timon & Pumba," "Junglebook," "101 Dalmatians," mostly scripted by Per Hedman.