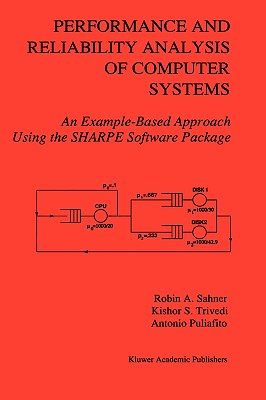 
Not On Our Shelves—Ships in 1-5 Days
(This book cannot be returned.)
Performance and Reliability Analysis of Computer Systems: An Example-Based Approach Using the SHARPE Software Package provides a variety of probabilistic, discrete-state models used to assess the reliability and performance of computer and communication systems. The models included are combinatorial reliability models (reliability block diagrams, fault trees and reliability graphs), directed, acyclic task precedence graphs, Markov and semi-Markov models (including Markov reward models), product-form queueing networks and generalized stochastic Petri nets. A practical approach to system modeling is followed; all of the examples described are solved and analyzed using the SHARPE tool.
In structuring the book, the authors have been careful to provide the reader with a methodological approach to analytical modeling techniques. These techniques are not seen as alternatives but rather as an integral part of a single process of assessment which, by hierarchically combining results from different kinds of models, makes it possible to use state-space methods for those parts of a system that require them and non-state-space methods for the more well-behaved parts of the system.
The SHARPE (Symbolic Hierarchical Automated Reliability and Performance Evaluator) package is the toolchest' that allows the authors to specify stochastic models easily and solve them quickly, adopting model hierarchies and very efficient solution techniques. All the models described in the book are specified and solved using the SHARPE language; its syntax is described and the source code of almost all the examples discussed is provided.
Audience: Suitable for use in advanced level courses covering reliability and performance of computer and communications systems and by researchers and practicing engineers whose work involves modeling of system performance and reliability.