Chocolat: From the Cocoa Bean to the Chocolate Bar (Hardcover) 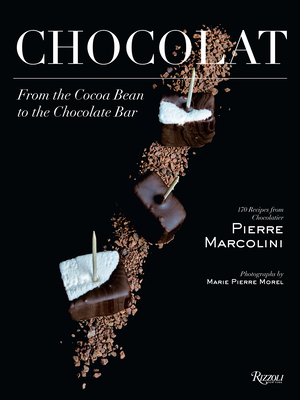 Chocolat: From the Cocoa Bean to the Chocolate Bar (Hardcover)


Special Order—Subject to Availability
Pierre Marcolini is Belgium's most acclaimed chocolatier, and his lavishly illustrated tribute to the joy of chocolate has been an international best-seller in French. Now available in English, he reveals trade secrets of the art of fine chocolate making that will inspire home bakers and chocolate lovers alike.

From Belgium's finest chocolatier who originated the "bean-to-bar" concept comes this collection of 170 recipes for the very best and most essential chocolate confections as only "the ambassador of Haute Chocolaterie" could contrive.
Pierre Marcolini is one of the world's foremost artisanal chocolatiers. Born in Belgium - arguably the center of the world's finest chocolate purveyors - Marcolini is considered Belgium's foremost practitioner of the art of "Haute Chocolaterie." He was named "Best Apprentice in Belgium" in 1988, "Best Worker in Belgium" (the youngest ever to receive this award), and won First Prize at the "Mandarine Napoléon International" competition in 1991. Since then he's won a string of awards. In 1995, he was crowned "World Pastry Champion," and later that year opened his first shop in Brussels. Since then he has expanded his brand to 28 outlets in Belgium, Japan, France, England, Luxembourg, Monaco, and Kuwait. Chae Rin Vincent originally came to Belgium as a news correspondent from her native South Korea but has since become one of the leading food stylists and writers working in the French language. Marie-Pierre Morel is one of Europe's best known photographers specializing in food and interior décor. Her work has appeared in leading publications in Europe as well as in many distinguished monographs, and she is celebrated for her strict adherence to photographing only with natural lighting.