This is Greece (Hardcover) 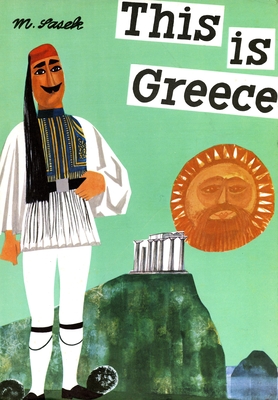 This is Greece (Hardcover)


On Our Shelves Now at:
Like the other Sasek classics, this is a facsimile edition of the original, first published in 1966. The illustrations have been meticulously preserved and the facts updated for the twenty-first century. The charming illustrations, coupled with Sasek’s playful narrative, make perfect souvenirs that will delight both children and parents. This is Greece captures the flavor and tradition of the birthplace of Western civilization. There’s Athens, with its spectacular views of the Acropolis, the Parthenon, temples, theaters, and marketplaces; architecture-renowned Corinth; Mycenae, inhabited since 3000 B.C.; Olympia, home of the gods; Delphi, famous for its legendary oracle; and the beautiful isles. There’s also modern-day Greece, where life is lived on street corners, in squares, and at tables amid reminders of the past.
M. Sasek was born in 1916 in Prague. An author and illustrator, he is best remembered for his classic stories on the great cities of the world. He died in 1980.
"Whimsical illustrations capture the panoramic history and fun in Greece today, this is a classic!" ~GlobeTracks, Inc.