Yoshitoshi: One Hundred Aspects of the Moon (Hardcover) 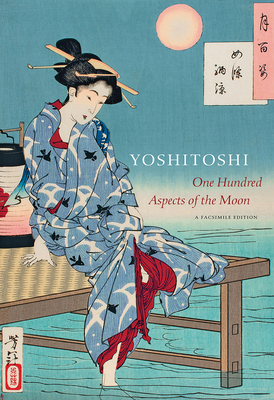 Yoshitoshi: One Hundred Aspects of the Moon (Hardcover)

A beautiful facsimile edition of the last masterpiece of ukiyo-e

Yoshitoshi (1839–1892) was the last virtuoso of the Japanese woodblock print, and the One Hundred Aspects of the Moon, published between 1885 and 1892, were his crowning achievement. This series—mainly illustrating stories from history and legend, unified by the motif of the moon—is charged with paradox. In order to carry forward the tradition of ukiyo-e, Yoshitoshi drew stylistic inspiration from the very forces that were rendering it obsolete—namely, Western art and mass media like photography and lithography. As if they realized they were witnessing the end of an era, the artist's public responded enthusiastically to his innovative series—many of the individual prints were sold out on the morning of their publication.

This magnificent facsimile of One Hundred Aspects of the Moon reproduces each print at its original size, facing an explanation of the subject. A thorough introductory text, augmented with many comparative illustrations, traces Yoshitoshi's career and the genesis of this series. Printed and bound to the most exacting specifications, this volume will be a must for aficionados of Japanese prints.

John Stevenson studied modern history at Oxford and worked and traveled across Asia for twenty years. He has written books and articles on various aspects of Asian art, from Japanese prints to Vietnamese ceramics. Formerly curator of Chinese art at the Seattle Art Museum and production manager at the University of Washington Press, Stevenson now lives on Kyushu Island, Japan.
Featured in the Publishers Weekly Holiday Gift Guide