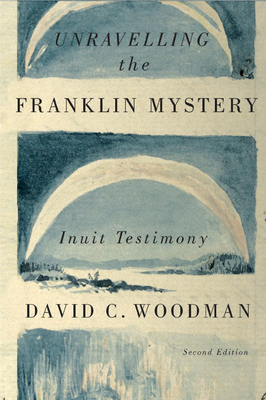 
Not On Our Shelves—Ships in 1-5 Days
David Woodman's classic reconstruction of the mysterious events surrounding the tragic Franklin expedition has taken on new importance in light of the recent discovery of the HMS Erebus wreck, the ship Sir John Franklin sailed on during his doomed 1845 quest to find the Northwest Passage to Asia. First published in 1991, Unravelling the Franklin Mystery boldly challenged standard interpretations and offered a new and compelling alternative. Among the many who have tried to discover the truth behind the Franklin disaster, Woodman was the first to recognize the profound importance of Inuit oral testimony and to analyze it in depth. From his investigations, Woodman concluded that the Inuit likely visited Franklin's ships while the crew was still on board and that there were some Inuit who actually saw the sinking of one of the ships. Much of the Inuit testimony presented here had never before been published, and it provided Woodman with the pivotal clue in his reconstruction of the puzzle of the Franklin disaster. Unravelling the Franklin Mystery is a compelling and impressive inquiry into a part of Canadian history that for one hundred and seventy years left many questions unanswered. In this edition, a new preface by the author addresses the recent discovery and reviews the work done in the intervening years on various aspects of the Franklin story, by Woodman and others, as it applies to the book's initial premise of the book that Inuit testimony holds the key to unlocking the mystery.
David C. Woodman is a senior master for BC Ferries and lives in Port Coquitlam, British Columbia.
"Woodman has done an excellent job of gathering Inuit testimony and presents a new emphasis which allows new interpre-tations and conclusions with regard to the Franklin epic." Dorothy Harley Eber, author of When the Whalers Were Up North

"Woodman has examined all the documentation on Inuit testimony with relentless thoroughness. He has made a vitally important, long overdue contribution ... It is a book anyone obsessed with Franklin will want to have." Toronto Star

"Compelling reading ... On a warm week at an Ontario lakefront cottage, I sat inside turning unwieldy page proofs ... and could not stop." Books in Canada

"Woodman's book will be invaluable ... to those who can't get enough on the Franklin mystery." Montreal Gazette

"Brilliant ... a joy to read ... It unfolds slowly like a good detective story ... The time is ripe for a fresh, new, original book about John Franklin. This is it." C. Stuart Houston, University of Saskatchewan

"Woodman has done an excellent job of gathering Inuit testimony and presents a new emphasis which allows new interpre-tations and conclusions with regard to the Franklin epic." Dorothy Harley Eber, author of When the Whalers Were Up North