They Said This Would Be Fun: Race, Campus Life, and Growing Up (Paperback) 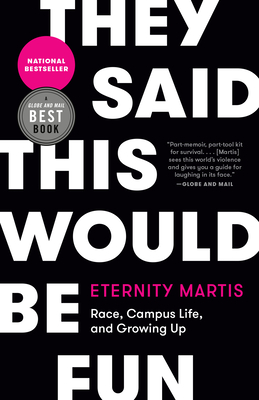 They Said This Would Be Fun: Race, Campus Life, and Growing Up (Paperback)


Not On Our Shelves—Ships in 1-5 Days
NATIONAL BESTSELLER

A powerful, moving memoir about what it's like to be a student of colour on a predominantly white campus.

A booksmart kid from Toronto, Eternity Martis was excited to move away to Western University for her undergraduate degree. But as one of the few Black students there, she soon discovered that the campus experiences she'd seen in movies were far more complex in reality. Over the next four years, Eternity learned more about what someone like her brought out in other people than she did about herself. She was confronted by white students in blackface at parties, dealt with being the only person of colour in class and was tokenized by her romantic partners. She heard racial slurs in bars, on the street, and during lectures. And she gathered labels she never asked for: Abuse survivor. Token. Bad feminist. But, by graduation, she found an unshakeable sense of self--and a support network of other women of colour.

Using her award-winning reporting skills, Eternity connects her own experience to the systemic issues plaguing students today. It's a memoir of pain, but also resilience.
ETERNITY MARTIS is an award-winning Toronto-based journalist. She was a 2017 National Magazine Awards finalist for Best New Writer and the 2018 winner of the Canadian Online Publishing Awards for Best Investigative Article. Her work has appeared in Vice, Huffington Post, The Walrus, CBC, Hazlitt, The Fader, Salon, and on academic syllabuses around the world. Her work on race and language has influenced media style guide changes across the country. She is the course developer and instructor of Reporting On Race: The Black Community in the Media at Ryerson University, the first of its kind in Canada, and the 2021 Journalist-in-Residence at the University of British Columbia. She earned an honours BA and a Certificate in Writing from Western University and an MJ from Ryerson University. She is also a winner of Canada's Top 100 Most Powerful Women by Women's Executive Network.

Her debut memoir, They Said This Would Be Fun, is a Toronto Star, Globe and Mail and Vancouver Sun bestseller. It's featured on anticipated and essential book lists including Now, the Globe and Mail, BlogTO, CBC, Chatelaine and more. CBC has named Eternity one of "Six Canadian writers of Black heritage to watch in 2020" and the book as one of "20 moving Canadian memoirs to read right now." PopSugar named it one of "5 Books About Race on College Campuses Every Student Should Read" and it is one of Chapters/Indigo's "Best Books of 2020." The audiobook has been named "Best Audiobooks Of 2020" by Apple and Audible. Recently, it became a finalist for the International Book Awards in the categories of Autobiography/Memoir and Social Change.
“University is a time of major personal growth and excitement but also systemic, baked-in discrimination and inequity. This book is for anyone who is still making sense of it all but especially for those who need communion with a beautifully-written account of what it's like to finally find your people.”
—Hannah Sung

"With fierce intelligence and flashes of humour, Eternity Martis exposes racism and sexism on contemporary university campuses through her personal story of coming of age as a young Black woman at a predominantly white school. A deeply felt memoir about resistance, resilience and the life-saving power of finding your own voice."—Rachel Giese, author of Boys: What It Means to Become a Man, winner of the Shaughnessy Cohen Prize for Political Writing

"I'm angry to hear that Canadian universities are still ignoring and isolating young racialized women, decades after my own experiences there. But I'm very glad that Eternity's brave, honest and funny book will be there for students of the future - as well as for institutions whose leaders have the courage and decency to change." —Denise Balkissoon, executive editor, Chatelaine

“Though They Said This Would Be Fun is Eternity Martis's debut, she is an authority on the pervasive nature of racism on North American university campuses—an oft-overlooked issue kept hush among so-called polite Canadians. They Said This Would Be Fun is not an easy read, nor is it always comfortable. But it is an essential book for allies—an exhaustive look at the discrimination Black women face in a country too often described as a haven of multiculturalism.”—Erica Lenti, Xtra

“Too many stories about the experience of racism on Canadian campuses remain buried, because of fear of reprisal or retaliation. With this spellbinding and important memoir, Eternity Martis offers us a clear-eyed, eloquent and no holds-barred portrayal of what it’s like to be a young Black woman studying in the “ivory tower.” Required reading for all those who are preparing to head to a Canadian university—and to those who head them up. I plan to buy it in bulk to hand out at my school. Unwaveringly unapologetic, richly written and powerfully conveyed, Martis offers us the book that scholars, students and university administrators have been waiting for—an unflinching look at racism on Canadian campuses. Following in the footsteps of writers like Roxane Gay and Scaachi Koul, but steadfastly providing her own distinctive voice, Martis’ book is at times shocking, powerful, surprisingly funny and most of all provides a seamless link between theoretical approaches to race and how it plays out in practice.” —Minelle Mahtani, Associate Professor, Department of Gender, Race, Sexuality and Social Justice, and Senior Advisor to the Provost on Racialized Faculty, University of British Columbia