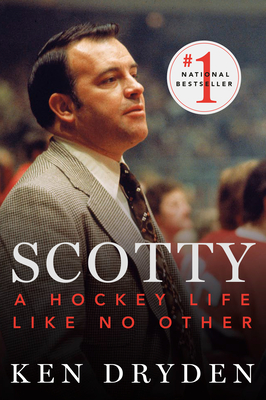 
Not On Our Shelves—Ships in 1-5 Days
NATIONAL BESTSELLER

Scotty Bowman is recognized as the best coach in hockey history, and one of the greatest coaches in all of sports. He won more games and more Stanley Cups than anyone else. Despite all the changes in hockey, he coached at the very top for more than four decades, his first Cup win and his last an astonishing thirty-nine years apart. Yet perhaps most uniquely, different from anyone else who has ever lived or ever will again, he has continuously experienced the best of hockey since he was fourteen years old. With his precious standing room pass to the Montreal Forum, he saw "Rocket" Richard play at his peak every Saturday night. He saw Gordie Howe as a seventeen-year-old just starting out. He scouted Bobby Orr as a thirteen-year-old in Parry Sound, Ontario. He coached Guy Lafleur and Mario Lemieux. He coached against Wayne Gretzky. For the past decade, as an advisor for the Chicago Blackhawks, he has watched Sidney Crosby, Alex Ovechkin, and Connor McDavid. He has seen it all up close.

Ken Dryden was a Hall-of-Fame goaltender with the Montreal Canadiens. His critically acclaimed and bestselling books have shaped the way we read and think about hockey.

Now the player and coach who won five Stanley Cups together team up once again as Dryden gives his coach a new test: Tell us about all these players and teams you've seen, but imagine yourself as their coach. Tell us about their weaknesses, not just their strengths. Tell us how you would coach them and coach against them. And then choose the top eight teams of all time, match them up against one another in a playoff series, and, separating the near-great from the great, tell us who would win. And why.

Scotty is about a life—a hockey life, a Canadian life, a life of achievement. It is Scotty Bowman in his natural element, behind the bench one more time.
KEN DRYDEN was a goalie for the Montreal Canadiens in the 1970s, during which time the team won six Stanley Cups, and he played for Team Canada in the 1972 Summit Series. He has been inducted into the Hockey Hall of Fame. He is a former federal member of parliament and cabinet minister, and is the author of many books, including The Game, Home Game (with Roy MacGregor), Game Change, and Scotty. He and his wife, Lynda, live in Toronto and have two children and four grandchildren.

"[Scotty] is the story of one of the game's greatest coaches written by one of the game's best goaltenders of all-time, and woven throughout are brilliant stories from two of the greatest minds to grace the ice." —Ken Campbell, The Hockey News

"It's possible [Dryden]'s an even better writer than he was a goaltender." —Mitch Melnick, TSN

"The book is a must-read for fans of the dynastic Canadiens, Lemieux's Cup-winning Penguins or the Yzerman/Fedorov Wings powerhouse, and because of Dryden's masterful prose, it should be considered a must-read for all hockey fans. It's most certainly worthy of Bowman's and Dryden's legacies." —Kevin Greenstein, Inside Hockey

“As an author, Ken Dryden is known for writing about hockey in a manner in which few others do or are capable. He goes beyond the score lines and cliché-ridden post-game interview style of hockey writing to plumb the depths of the game at levels rarely examined.” —Winnipeg Free Press

“Game Change is arguably Dryden's most significant book since The Game, which is still widely regarded as the greatest hockey book ever written and as one of the best sports books of all time. As good as The Game was, this latest work is the more important to read right now.” —Brett Popplewell, Globe and Mail