It Seemed Like a Good Idea at the Time: My Adventures in Life and Food (Hardcover) 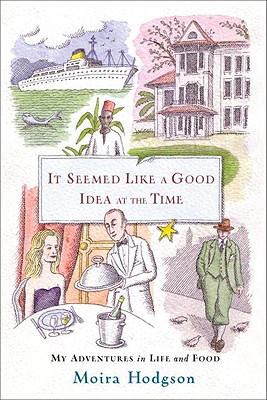 It Seemed Like a Good Idea at the Time: My Adventures in Life and Food (Hardcover)

The daughter of a British Foreign Service officer, Moira Hodgson spent her childhood in many a strange and exotic land. She discovered American food in Saigon, ate wild boar in Berlin, and learned how to prepare potatoes from her eccentric Irish grandmother. Today, Hodgson has a well-deserved reputation as a discerning critic whose columns in the New York Observer were devoured by dedicated food lovers for two decades.

A delightful memoir of meals from around the world—complete with recipes—It Seemed Like a Good Idea at the Time reflects Hodgson’s talent for connecting her love of food and travel with the people and places in her life. Whether she’s dining on Moroccan mechoui, a whole lamb baked for a day over coals, or struggling to entertain in a tiny Greenwich Village apartment, her reminiscences are always a treat.

Moira Hodgson was the restaurant critic for the "New York Observer" for two decades. She has worked on the staff of the "New York Times and Vanity Fair, " and is the author of several cookbooks. She lives in New York City and Connecticut.

“Delightful. . . . Hodgson’s lust for life leaps from every page.” —The Washington Times

“Engaging. . . . If [Hodgson’s] thoughtful, enjoyable recollections may be said to have a theme, it is this: ‘Food for sympathy, food for love, food for keeping death at bay.’” —The Wall Street Journal