Breaking Open the Head: A Psychedelic Journey into the Heart of Contemporary Shamanism (Paperback) 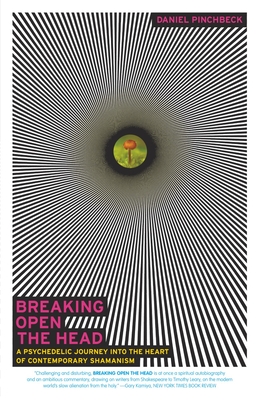 Breaking Open the Head: A Psychedelic Journey into the Heart of Contemporary Shamanism (Paperback)


Special Order—Subject to Availability
A dazzling work of personal travelogue and cultural criticism that ranges from the primitive to the postmodern in a quest for the promise and meaning of the psychedelic experience.

While psychedelics of all sorts are demonized in America today, the visionary compounds found in plants are the spiritual sacraments of tribal cultures around the world. From the iboga of the Bwiti in Gabon, to the Mazatecs of Mexico, these plants are sacred because they awaken the mind to other levels of awareness--to a holographic vision of the universe.

Breaking Open the Head is a passionate, multilayered, and sometimes rashly personal inquiry into this deep division. On one level, Daniel Pinchbeck tells the story of the encounters between the modern consciousness of the West and these sacramental substances, including such thinkers as Allen Ginsberg, Antonin Artaud, Walter Benjamin, and Terence McKenna, and a new underground of present-day ethnobotanists, chemists, psychonauts, and philosophers. It is also a scrupulous recording of the author's wide-ranging investigation with these outlaw compounds, including a thirty-hour tribal initiation in West Africa; an all-night encounter with the master shamans of the South American rain forest; and a report from a psychedelic utopia in the Black Rock Desert that is the Burning Man Festival.

Breaking Open the Head is brave participatory journalism at its best, a vivid account of psychic and intellectual experiences that opened doors in the wall of Western rationalism and completed Daniel Pinchbeck's personal transformation from a jaded Manhattan journalist to shamanic initiate and grateful citizen of the cosmos.
DANIEL PINCHBECK is a founding editor of Open City, and he has written for such publications as Rolling Stone, Men's Journal, and The Village Voice, where sections of his book have previously appeared.
"Grippingly dramatic, powerfully moving, this is a classic of the literature of ecstasy."
--Booklist (starred review)

"In his reporting, [Pinchbeck] manages to walk a difficult tonal tightrope, balancing his skepticism with a desire to be transformed. He thoughtfully serveys the literature about psychedelic drugs, but the most exhilirating and illuminating sections are the descriptions of drug taking...Pinchbeck's earnest, engaged and winning matter carry the book."
--Publishers Weekly

"I much admire Breaking Open the Head for being the account of an authentic quest for enlightenment in jungles, up rivers, in deserts, and hardest of all to access, the human mind and heart via one of the oldest thoroughfares on earth, mind-expanding drugs. This is a serious and illuminating journey."
--Paul Theroux