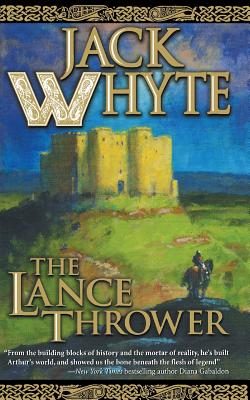 This is book number 8 in the Camulod Chronicles series.

Jack Whyte has written a lyrical epic, retelling the myths behind the boy who would become the Man Who Would Be King--Arthur Pendragon. He has shown us, as Diana Gabaldon said, "the bone beneath the flesh of legend." In his last book in this series, we witnessed the young king pull the sword from the stone and begin his journey to greatness. Now we reach the tale itself-how the most shining court in history was made.

Clothar is a young man of promise. He has been sent from the wreckage of Gaul to one of the few schools remaining, where logic and rhetoric are taught along with battle techniques that will allow him to survive in the cruel new world where the veneer of civilization is held together by barbarism. He is sent by his mentor on a journey to aid another young man: Arthur Pendragon. He is a man who wants to replace barbarism with law, and keep those who work only for destruction at bay. He is seen, as the last great hope for all that is good.

Clothar is drawn to this man, and together they build a dream too perfect to last--and, with a special woman, they share a love that will nearly destroy them all...

The name of Clothar may be unknown to modern readers, for tales change in the telling through centuries. But any reader will surely know this heroic young man as well as they know the man who became his king. Hundreds of years later, chronicles call Clothar, the Lance Thrower, by a much more common name.

JACK WHYTE was born and raised in Scotland and has lived in Canada since 1967.  He has been an actor, orator, singer, and poet at various stages of his life, and was awarded an honorary doctorate of letters for his contribution to Canadian popular fiction.  Whyte is the author of the internationally bestselling Dream of Eagles series and the Templar trilogy.  He lives in Kelowna, British Columbia.

“Of the scores of novels based on Arthurian legend, Whyte's ‘Camulod' series is distinctive, particularly in the rendering of its leading players and the residual Roman influences that survived in Britain during the Dark Ages.” —The Washington Post on Camulod Chronicles

“Whyte has done an excellent job of constructing a viable pre-Arthurian world. His fifth-century Europe is evocative, earthy, and well researched.” —Romantic Times on Camulod Chronicles

“As Whyte waves off the fog of fantasy and legend surrounding the Arthurian story, he renders characters and events real and plausible.” —Booklist on Camulod Chronicles

“Whyte shows why Camulod was such a wonder, demonstrating time and again how persistence, knowledge and empathy can help push back the darkness of ignorance to build a shining future.” —Publishers Weekly on Camulod Chronicles

“Whyte's story has an undeniable power that goes beyond the borrowed resonances of the mythic tales he's reworking.” —Fantasy & Science Fiction on Camulod Chronicles

“A rousing historical adventure, full of hand-to hand combat, hidden treasures, and last-minute escapes, a refreshing change from the many quasi--historical, politically correct Arthurians out there.” —Locus on The Skystone

“It's one of the most interesting historical novels that I've ever read and I've read plenty.” —Marion Zimmer Bradley on The Skystone