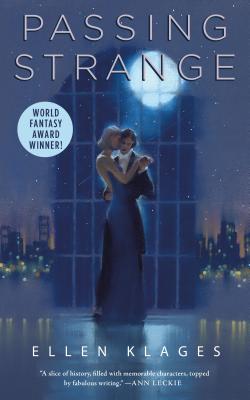 Inspired by the pulps, film noir, and screwball comedy, Passing Strange is a story as unusual and complex as San Francisco itself from World Fantasy Award winning author Ellen Klages, and a finalist for the 2017 Nebula Award for Best Novella

San Francisco in 1940 is a haven for the unconventional. Tourists flock to the cities within the city: the Magic City of the World’s Fair on an island created of artifice and illusion; the forbidden city of Chinatown, a separate, alien world of exotic food and nightclubs that offer “authentic” experiences, straight from the pages of the pulps; and the twilight world of forbidden love, where outcasts from conventional society can meet.

Six women find their lives as tangled with each other’s as they are with the city they call home. They discover love and danger on the borders where magic, science, and art intersect.

ELLEN KLAGES is the author of the acclaimed historical novels: The Green Glass Sea, which won the Scott O’Dell Award, and the New Mexico Book Award; and White Sands, Red Menace, which won the California and New Mexico Book awards. Her story, “Basement Magic,” won a Nebula Award and “Wakulla Springs,” co-authored with Andy Duncan, was nominated for the Nebula, Hugo, and Locus awards, and won the World Fantasy Award for Best Novella. She lives in San Francisco, in a small house full of strange and wondrous things.

"A moving and genuine love story." —The Washington Post

"With Passing Strange, Ellen Klages has spun a marvelously gritty tale of the bad old days, deftly weaving a tapestry from bittersweet nostalgia, magic, weirdness, romance,and the ugly truth of being queer in San Francisco at the dawn of WWII. It earns my highest compliment: I wanted more." —World Fantasy Award winner Caitlin R. Kiernan

"Ellen Klages's love for queer San Francisco is evident in every line: its history, its mystery, and its people in all their variety and glory. I smiled as I read. You will, too." —Nicola Griffith, author of Hild

"Klages folds history and the modern world into a thoroughly satisfying novella that's rich in detail, warm in regard, and clever in execution." —Publishers Weekly, starred review

“A tightly written plot and an unyielding sense of wonder… Passing Strange is a quick, enchanting read.” —Romantic Times

'Klages deftly weaves each thread to a climax both bittersweet and empowering while demonstrating historical knowledge and immense fondness for her subjects and setting. For fans of speculative fiction with a strong sense of place." —Booklist

“Passing Strange is a passing subtle, detailed intergenerational fantasy with a pulp influenced story and a literary sensibility full of the past and the artefacts it leaves behind. Queer history, San Francisco history and a pinch of Weird Tales." —Geoff Ryman, winner of the Clarke, Nebula and World Fantasy Awards.

"Elegantly constructed, elegiac, and hopeful in the face of difficult things." —Liz Bourke