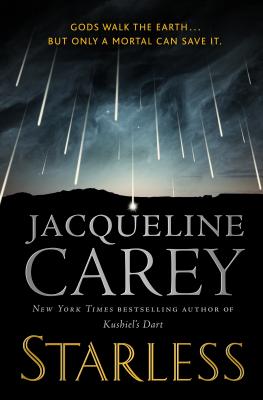 Jacqueline Carey is back with an amazing adventure not seen since her New York Times bestselling Kushiel's Legacy series. Lush and sensual, Starless introduces us to an epic world where exiled gods live among us, and a hero whose journey will resonate long after the last page is turned.

I was nine years old the first time I tried to kill a man...

Destined from birth to serve as protector of the princess Zariya, Khai is trained in the arts of killing and stealth by a warrior sect in the deep desert; yet there is one profound truth that has been withheld from him.

In the court of the Sun-Blessed, Khai must learn to navigate deadly intrigue and his own conflicted identity…but in the far reaches of the western seas, the dark god Miasmus is rising, intent on nothing less than wholesale destruction.

If Khai is to keep his soul’s twin Zariya alive, their only hope lies with an unlikely crew of prophecy-seekers on a journey that will take them farther beneath the starless skies than anyone can imagine.

Jacqueline Carey is the author of the bestselling Kushiel trilogy (Kushiel’s Dart, Kushiel’s Chosen, and Kushiel’s Avatar) and her epic fantasy duology, The Sundering (Banewreaker and Godslayer). She has won the Locus Award for Best First Novel and the Romantic Times Reviewers' Choice Award for Best Fantasy Novel. Her books have been listed on many booksellers’ top ten fantasy books lists. Always an avid reader, Carey began writing fiction as a hobby in high school. After graduating from Lake Forest College, she worked for six months at a bookstore in London, and returned to the United States with a driving passion to write professionally. She resides in western Michigan.

“Carey is at the peak of her luminous storytelling powers in a tale that will appeal to readers of Brandon Sanderson and Patrick Rothfuss, while its thought-provoking look at gender, love, and sexual preference bring to mind Ursula K. LeGuin’s The Left Hand of Darkness.”—Booklist (starred)

“Carey handles themes of duty, love, and identity with tenderness and fortitude, never pigeonholing her protagonists, and the tapestry of her characters elevates this novel above its peers.”—Publishers Weekly (starred)

“Fans of world-building powerhouses such as Rhoda Belleza and Garth Nix will be in awe of Carey's stand-alone epic.”—Library Journal

“A unique story that asks serious questions about identity, fate and honor and it will appeal to fantasy fans who appreciate in-depth character exposition.”—RT (4 stars)

“A complex saga worthy of the field’s best writer on such a scale, George R. R. Martin.”—Locus on Kushiel’s Dart

“The heroine reminds one of an equally strong-minded sister whose home was Tara.”—Publishers Weekly, starred review, on Kushiel’s Dart