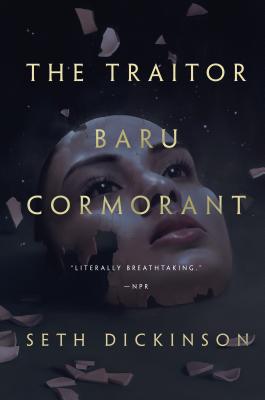 This is book number 1 in the The Masquerade series.

The Traitor Baru Cormorant is the critically-acclaimed debut novel from Seth Dickinson, one of the rising new stars in fantasy.

Tomorrow, on the beach, Baru Cormorant will look up and see red sails on the horizon.

The Empire of Masks is coming, armed with coin and ink, doctrine and compass, soap and lies. They will conquer Baru’s island, rewrite her culture, criminalize her customs, and dispose of one of her fathers. But Baru is patient. She'll swallow her hate, join the Masquerade, and claw her way high enough up the rungs of power to set her people free.

To test her loyalty, the Masquerade will send Baru to bring order to distant Aurdwynn, a snakepit of rebels, informants, and seditious dukes. But Baru is a savant in games of power, as ruthless in her tactics as she is fixated on her goals. In the calculus of her schemes, all ledgers must be balanced, and the price of liberation paid in full.

SETH DICKINSON is the author of the Baru Cormorant novels and many short stories, as well as much of the lore and backstory of Bungie Studios’ Destiny. Seth lives in New York City.

“A fascinating tale of political intrigue and national unrest.” – The Washington Post

“Literally breathtaking….Baru Cormorant as a character is magnificent. I found it impossible not to root for her even amid horrors of her making, to grieve with her and for her at various points, to clench my fists in her defense and in desperate need for her to stay whole. There is so much to admire and so much to mourn throughout the building tragedy of this novel.” – NPR.org

“A breathtaking contender with George R. R. Martin's Game of Thrones. Perfect for those who thrive on fantasy with Machiavellian overtones, this labyrinthine story starts off a wee bit slow but soon enough sets you on the path toward a high-stakes clash you're almost afraid to reach.” – Omnivoracious

“This is an accomplished debut, with a heroine whose motives are murky, seemingly even to herself. The twists and turns our unreliable narrator takes as she pushes the Aurdwynn nobles to rebel reveal her goals yet also expose her loneliness. We’ve only seen a fraction of the world of the Masquerade and a glimpse of Baru’s plans, setting the stage for a compelling series." —Library Journal, starred review

“Dickinson’s debut, the start of a trilogy set in an impressively well-crafted fantasy world, is assured and impressive….Readers will share every one of Baru’s strong, suppressed emotions. Dickinson’s worldbuilding is ambitious and his language deviously subtle; both are seductive in their complexity.” –Publishers Weekly, starred review