The Shadow Rising: Book Four of 'The Wheel of Time' (Paperback) 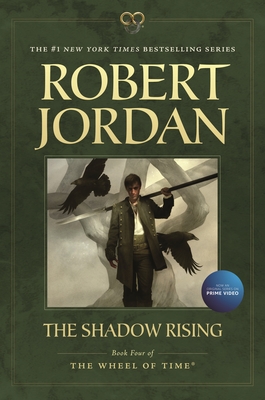 The Shadow Rising: Book Four of 'The Wheel of Time' (Paperback)

This is book number 4 in the Wheel of Time series.

In The Shadow Rising, the fourth novel in Robert Jordan’s #1 New York Times bestselling epic fantasy series, The Wheel of Time®, Rand al’Thor now wields the sword Callandor. He is both the Champion of Light and the Dragon Reborn. Now, he seeks answers to another prophecy that lies with the warrior people known as the Aiel to put him on the path of learning how to wield the One Power.

Accompanied by Moiraine Damodred, Rand arrives at the Aiel Waste and is granted permission by the Wise Ones to enter the sacred city of Rhuidean. After passing through a doorframe ter'angreal, Moiraine gains foresight while the Aiel await Rand's return, either with both arms marked by dragon symbols, validating his identity as He Who Comes With the Dawn, the Chief of Chiefs of all the Aiel—or to never emerge at all.

Since its debut in 1990, The Wheel of Time® has captivated millions of readers around the globe with its scope, originality, and compelling characters. The last six books in series were all instant #1 New York Times bestsellers, and The Eye of the World was named one of America's best-loved novels by PBS's The Great American Read.