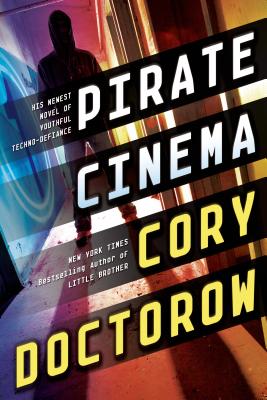 From the New York Times bestselling author of Little Brother Cory Doctorow comes Pirate Cinema, a new tale of a brilliant hacker runaway who finds himself standing up to tyranny.

Trent McCauley is sixteen, brilliant, and obsessed with one thing: making movies on his computer by reassembling footage from popular films he downloads from the Net. In the dystopian near-future Britain where Trent is growing up, this is more illegal than ever; the punishment for being caught three times is that your entire household's access to the Internet is cut off for a year, with no appeal.

Trent's too clever for that to happen. Except it does, and it nearly destroys his family. Shamed and shattered, Trent runs away to London, where he slowly learns the ways of staying alive on the streets. This brings him in touch with a demimonde of artists and activists who are trying to fight a new bill that will criminalize even more harmless internet creativity, making felons of millions of British citizens at a single stroke.

Things look bad. Parliament is subject to the demands of a few wealthy media conglomerates. But the powers-that-be haven't entirely reckoned with the power of a gripping movie to change people's minds....

Cory Doctorow is a regular contributor to the Guardian, Locus, and many other publications. He is a special consultant to the Electronic Frontier Foundation, an MIT Media Lab Research Associate and a visiting professor of Computer Science at the Open University. His award-winning novel Little Brother and its sequel Homeland were a New York Times bestsellers. His novella collection Radicalized was a CBC Best Fiction of 2019 selection. Born and raised in Canada, he lives in Los Angeles.

“His most cogent, energizing call-to-arms to date.” —Booklist, starred review

“A terrific read ... A neat story and a cogently written, passionately felt argument. It's a stirring call to arms.” —The New York Times on Little Brother

“One of the year's most important books.” —Chicago Tribune on Little Brother

“I'm a huge fan of Little Brother. Reading about m1k3y, Ange, and their friends helped me visualize the escalating intrusions on our freedom and privacy wrought by advances in technology. The book describes a dystopia that seems chillingly plausible-and near.” —Alex Kozinski, Chief Justice of the U. S. Court of Appeals for the Ninth Circuit on Little Brother