The Fort at River's Bend: Book Five of The Camulod Chronicles (Paperback) 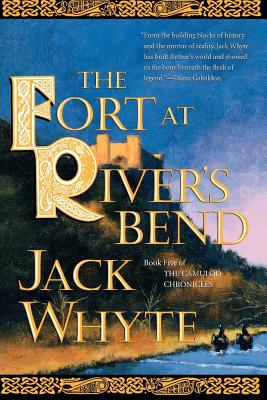 The Fort at River's Bend: Book Five of The Camulod Chronicles (Paperback)

This is book number 5 in the Camulod Chronicles series.

Merlyn Britannicus, leader of the colony known as Camulod, is faced with the task of educating his young charge, Arthur, future King of the Britons. Fearing for the life of his nephew when an assassination attempt is thwarted, Merlyn takes Arthur and his boyhood companions Gwin, Ghilleadh, and Bedwyr, to the ruins of a long-abandoned Roman fort far from Camulod. Once there, Merlyn realizes it's time for Arthur to become worthy of the sword he is destined to wield later in his life-the mighty Excalibur.

But beyond their idyllic hiding place, forces threaten the tenuous peace of Camulod. In Cambria, the death of Arthur's father Uther has left his people leaderless, and in Cornwall, Merlyn's enemy Peter Ironhair is gathering forces to destroy all Merlyn holds dear.

And Merlyn himself is struggling, because in order to make his dream of a united Britain real, he must put the person he loves most in the world in mortal danger-he and Arthur must return to Camulod.

JACK WHYTE was born and raised in Scotland and has lived in Canada since 1967.  He has been an actor, orator, singer, and poet at various stages of his life, and was awarded an honorary doctorate of letters for his contribution to Canadian popular fiction.  Whyte is the author of the internationally bestselling Dream of Eagles series and the Templar trilogy.  He lives in Kelowna, British Columbia.

“From the building blocks of history and the mortar of reality, Jack Whyte has built Arthur's world, and showed is the bone beneath the flesh of legend.” —Diana Gabaldon

“A series that promises to provide historic plausibility to the legend of King Arthur...the best of its type in the near quarter of a century since Mary Stewart's version of these legends burst upon the publishing scene.” —The Cattanooga Times