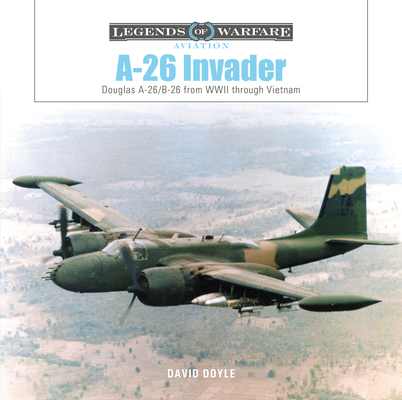 This is book number 59 in the Legends of Warfare: Aviation series.

The Douglas Invader has the distinction of being used by the United States in a combat role in WWII, Korea, and Vietnam. Originally created as an attack aircraft, with the designation A-26, the Invader was intended to replace the Douglas A-20, North American B-25, and Martin B-26 in the US Army Air Forces. However, production delays prevented the aircraft from reaching the field until June 1944. With up to 14 forward-firing .50-caliber machine guns as well as bombs and rockets, the Invader was well suited for ground strikes when war broke out in Korea in 1951. The Invader returned to combat during that war, carrying the markings of the US Air Force and redesignated B-26. Used first by the French during their war in Indochina, Invaders later returned to the skies over Vietnam in the hands of American as well as South Vietnamese crews. In order to base the type in Thailand, which prohibited the USAF from basing bombers in the country, the Invader was once more classified as an attack aircraft, and the A-26 designation returned. This volume is profusely illustrated with over 250 photos, including vintage color, as well as profile illustrations and line drawings.