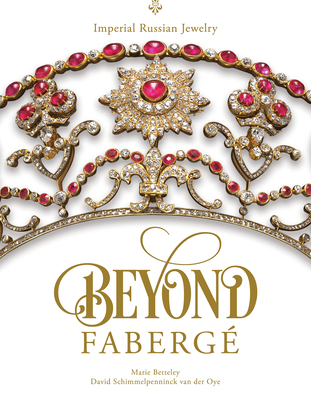 
Not On Our Shelves—Ships in 1-5 Days
A rare look at the exquisite world of Russian treasures that lies beyond Faberg . Imperial Russia evokes images of a vanished court's unparalleled splendor: magnificent tiaras, gem-encrusted necklaces, snuffboxes, and other diamond-studded baubles of the tsars and tsarinas. During that time, jewelry symbolized power and wealth, and no one knew this better than the Romanovs. The era marked the high point of the Russian jewelers' art. Beginning with Catherine I's reign in 1725, in the century when women ruled Russia, until the Russian Revolution of 1917, the imperial capital's goldsmiths perfected their craft, and soon the quality of Russia's jewelry equaled, if not surpassed, the best that Europe's capitals could offer. Who created these jewels that helped make the Russian court the richest in Europe? Hint: it wasn't Carl Faberg . This is the first systematic survey in any language of all the leading jewelers and silver masters of imperial Russia. The authors skillfully unfold for us the lives, histories, creations, and makers' marks of the artisans whose jewels and silver masterworks bedazzled the tsars. The previously unheralded names include Pauzi , Bolin, Hahn, Koechli, Seftigen, Marshak, Morozov, Nicholls & Plincke, Grachev, Sazikov, and many others. The market for these exquisite masterworks is also explored, from its beginnings to today's auction world and collector demand. More than 600 stunning photos reacquaint the world with the master artisans and their creations.