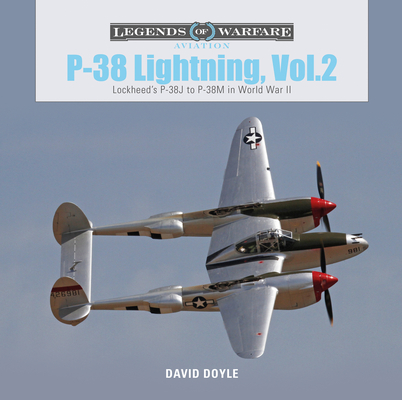 This is book number 24 in the Legends of Warfare: Aviation series.

This second of two volumes continues the P-38 story by focusing on the later, mass-produced models of this historic fighter--P-38J through P-38M. Each type is examined through carefully researched archival photos, as well as photographs of currently preserved examples. Known to the enemy during World War II as the Fork-tailed devil, the pilots of the Lockheed P-38 Lightning were charged with the responsibility of escorting American bombers deep over heavily defended Europe during the early years of the air campaign against Nazi Germany. In the Pacific, the Lightning's long range was put to good use flying over vast expanses of ocean. Detailed text and captions illustrate not only the design and construction of the later-war Lightnings, but also their combat use in WWII. Large, clear photos, coupled with descriptive and informative captions, put the reader on the airfield and in the sky with this historic aircraft.
Author of more than 100 books, David Doyle's aviation books are noted for their thorough coverage of historic aircraft and his celebrated ability to locate scarce vintage imagery.