B-52 Stratofortress: Boeing's Iconic Bomber from 1952 to the Present (Legends of Warfare: Aviation #8) (Hardcover) 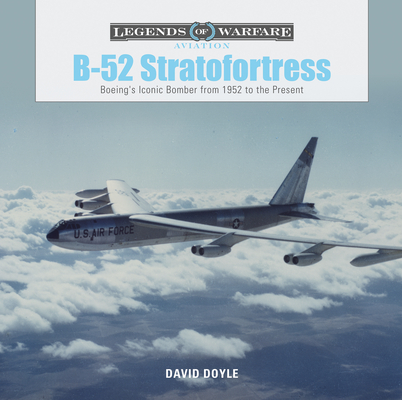 B-52 Stratofortress: Boeing's Iconic Bomber from 1952 to the Present (Legends of Warfare: Aviation #8) (Hardcover)

This is book number 8 in the Legends of Warfare: Aviation series.

One of America's most famous aircraft, the Boeing B-52 Stratofortress continues to form the backbone of the US nuclear deterrent, and it has also become the nation's principle heavy tactical bomber. It has filled this role since the the early years of the Cold War, the heavy bombing raids during the Vietnam War, and recently in Iraq and Afghanistan. The history of this iconic aircraft is presented through carefully researched photos, many of which have never before been published. Its design and development during the post-WWII years, through the many modifications and upgrades up to the present day are covered in detail. Large, clear photos, coupled with descriptive and informative captions, put the reader on the airfield and in the sky with this historic aircraft. Part of the Legends of Warfare series.
Author of more than 100 books, David Doyle's aviation books are noted for their thorough coverage of historic aircraft and his celebrated ability to locate scarce vintage imagery.