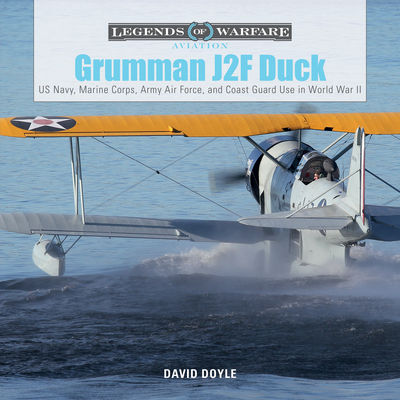 This is book number 6 in the Legends of Warfare: Aviation series.

The Grumman J2F Duck formed the backbone of America's over water utility squadrons from 1934 until beyond WWII, setting various aviation records during this service. A single-engine amphibious aircraft (also produced by Columbia Aircraft), the Duck saw service with the US Navy, Marine Corps, Army Air Force, and Coast Guard in a variety of roles including, reconnaissance, air-sea rescue, scouting/observation, and more. This volume is profusely illustrated with scarce archival photographs from diverse collections, including previously unpublished images. Part of the Legends of Warfare series.
Author of over 100 books, David Doyle was presented the Bart Vanderveen Award, recognizing, " . . . the individual who has contributed the most to the historic preservation of military vehicles worldwide" in 2015 by the Military Vehicle Preservation Association.