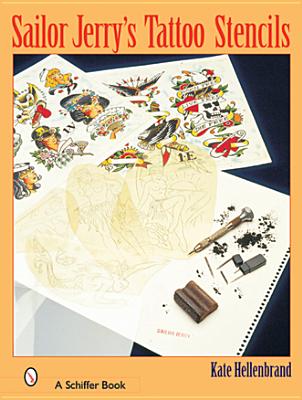 
Not On Our Shelves—Ships in 1-5 Days
American tattoo master Sailor Jerry Collins of Hawaii is best known for his remarkable tattoo designs, blending the fluidity of Asian motifs into classic American tattoo imagery. Until now, most of Sailor Jerry's work has been controlled by a handful of collectors, seen only at museum or art gallery exhibitions or in short-run, self-published books. Here is a sizeable portion of Sailor Jerry's stencils, the newest tattoo collectible, spanning his tattoo career, from the 1940s to the early 1970s. The basic line work of hundreds of his staple and surprisingly beautiful designs--pin-ups, roses, bluebirds, hearts, and banners, and Jerry's infamous military/political cartoons. The stencils themselves were handcut in celluloid, vinyl or acetate sheets by the master himself for use during his day-to-day thriving tattoo trade in downtown Honolulu. They are, in the best sense, permanent tattoos carved in plastic, enduring through time. In their original condition, most carry residual charcoal dust from their last use. All are signed by Jerry with one of his several distinctive signatures. This is the only book of its kind--a workbook for artists, and a design catalog for folk art historians. The value of the stencils is included, along with descriptions of stencils and their usage and a glossary of tattoo terminology.
Kate Hellenbrand is an award-winning tattoo artist and writer. She began tattooing in 1971 in New York City, where she lives today. She worked with Sailor Jerry in his Honolulu shop in 1972 and remained his friend until his death in 1973.