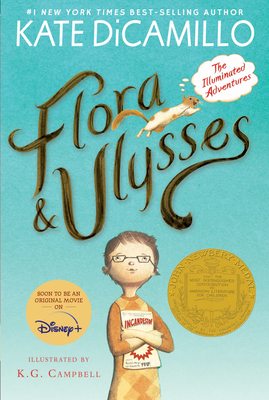 
On Our Shelves Now at:
Available in a paperback edition! The beloved 2014 Newbery Medal winner by former National Ambassador for Young People’s Literature Kate DiCamillo.

Holy unanticipated occurrences! From #1 New York Times best-selling author Kate DiCamillo comes a laugh-out-loud story filled with eccentric, endearing characters — a novel interspersed with comic-style graphic sequences and full-page illustrations, all rendered in black and white by K. G. Campbell.
In Flora and Ulysses, longtime fans will find a happy marriage of Mercy Watson's warmth and wackiness and Edward Tulane's gentle life lessons. In Flora, they will find a girl worth knowing, and one they will remember.
—The New York Times Book Review

Newbery-winner DiCamillo is a master storyteller not just because she creates characters who dance off the pages and plots, whether epic or small, that never fail to engage and delight readers. Her biggest strength is exposing the truths that open and heal the human heart. She believes in possibilities and forgiveness and teaches her audience that the salt of life can be cut with the right measure of love.
—Booklist (starred review)

Despite supremely quirky characters and dialogue worthy of an SAT prep class, there’s real emotion at the heart of this story involving two kids who have been failed by the most important people in their lives: their parents.
—Publishers Weekly (starred review)

Rife with marvelously rich vocabulary reminiscent of the early superhero era (e.g., “Holy unanticipated occurrences!”) and amusing glimpses at the world from the point of view of Ulysses the supersquirrel, this book will appeal to a broad audience of sophisticated readers. There are plenty of action sequences, but the novel primarily dwells in the realm of sensitive, hopeful, and quietly philosophical literature.
—School Library Journal (starred review)