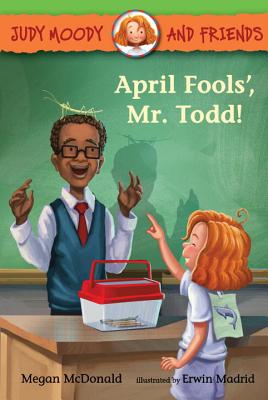 This is book number 8 in the Judy Moody and Friends series.

It’s April Fools' Day — and Judy’s birthday — and Mr. Todd has a trick or two of his own planned in the latest Judy Moody tale for newly independent readers.

April Fools' Day just happens to be one of Judy Moody’s favorite days of the year. And this year she’s got one thing on her mind: the perfect prank she’s going to play on Mr. Todd, thanks to an awesome present from her brother, Stink. Gotcha, Mr. Todd! But in all the excitement over spaghetti trees, April fish, and fools' errands, Judy worries that something else will be forgotten by Mr. Todd and Class 3T altogether: April 1 also happens to be Judy’s birthday! Gulp! Will her friends remember in time, or will Judy be the fool this year? And just what might Mr. Todd have up his sleeve?
Megan McDonald is the creator of the popular and award-winning Judy Moody and Stink series for older readers. She has written many other books for children, too, including two for beginning readers: Ant and Honey Bee: A Pair of Friends at Halloween and Ant and Honey Bee: A Pair of Friends in Winter. Megan McDonald lives in California.

Erwin Madrid has worked as a visual development artist for the Shrek franchise and Madagascar: Escape 2 Africa as well as creating conceptual art for video games. He is also the illustrator of The Scary Places Map Book by B. G. Hennessy. Erwin Madrid lives in California.
This Judy Moody book is about to make you laugh your pants off because it is filled with jokes and laughter!
—Story Monsters Ink